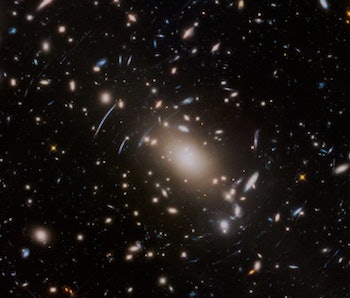 With Halloween fast approaching, it’s only fitting that astronomers have spotted some galaxies behaving very strangely. New research based on NASA and ESA Hubble Telescope observations has raised new questions about these spooky galaxies and the ultra-mysterious stuff known as dark matter.

Galaxy clusters — which are literally just conglomerates of many galaxies — contain one special galaxy at their core, called the “brightest cluster galaxy” (BCG). According to the currently accepted standard model of dark matter, after a chaotic event like a merger, that hearty BCG should remain in the cluster’s center, unbothered. Theoretically, the gravitational influence of dark matter should keep the BCGs in place, but recent Hubble data suggest this might not actually be the case.

In a new study published in the Monthly Notices of the Royal Astronomical Society, a team of astronomers explains some unusual behavior they’ve recently observed in galaxy clusters. Most notably, they discovered that BCGs have a hard time calming down after a turbulent event — instead of remaining fixed, they might “wobble” around the center of mass within the galaxy cluster. As someone with an anxiety disorder, I find the inability to calm down after literally anything stressful very relatable. I am oddly comforted by these anxious galaxies, wobbling around in the void.

“We found that the BCGs wobble around center of the [dark matter] halos,” the study’s lead author David Harvey, astronomer at EPFL, Switzerland, said in a press release. “This indicates that, rather than a dense region in the centre of the galaxy cluster, as predicted by the cold dark matter model, there is a much shallower central density. This is a striking signal of exotic forms of dark matter right at the heart of galaxy clusters.”

Right now, scientists are unsure about how to classify this alleged “wobbling.” It might be a new behavior of dark matter — that mysterious material that makes up about 27% of the universe, but has never been directly observed. If wobbly galaxies are caused by this material, it could mean dark matter particles have the ability to interact with each other. This totally diverges from our current understanding of dark matter, so very smart people have a lot of explaining to do.

While this is far from a definitive answer about the way dark matter influences galaxies, at the very least, it opens the floor for new questions. For now, we can marvel at these cute, wobbly galaxies and wonder what could made them so upset. It’s okay, wobbly galaxies — we’re here for you.

Ever wonder how the Guardians travel so dang fast? Check out this video about wormhole travel in Guardians of the Galaxy Vol. 2, according to a theoretical physicist.

More like this
Science
5.19.2022 11:15 AM
These galaxies have no dark matter — and astronomers may finally know why
By Charles Q. Choi
Science
5.19.2022 11:00 AM
NASA InSight shutting down and more: Understand the world through 9 images
By Robin Bea
Science
5.17.2022 8:45 PM
NASA announces the end of its Marsquake-hunting lander
By Doris Elín Urrutia
Related Tags
Share: