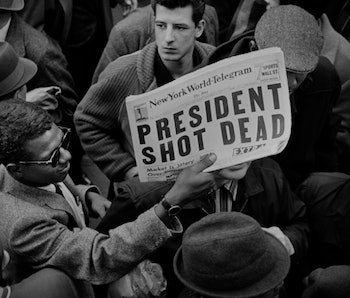 On Thursday, a huge swath of previously classified documents about the 1963 assassination of President John F. Kennedy will be made public. The greatest conspiracy theory in American history — there more of them than those about aliens or the moon landing — has also seen science fiction storylines exhaustively approach the subject.

From Stephen King to The X-Files to Philip K. Dick, here are six ways popular sci-fi has anticipated secret histories surrounding this infamous historical event. Aliens and time travel are almost certainly involved. But then again, you probably knew that.

Spoilers ahead for The X-Files, Quantum Leap, a few novels, and who knows, maybe the actual declassified JFK files themselves!

The basic premise of Quantum Leap always created a unique blend of time-travel paradoxes and holier-than-thou moralizing. Sam Beckett (Scott Bakula) leaps into the bodies of persons in the past to “set right what once went wrong.” In the controversial episode “Lee Harvey Oswald,” Sam inhabits Oswald’s body for a moment, before leaping into the body of a CIA agent Clint Hill. Every week, the audience is wondering who Sam is destined to save, so when this episode aired in 1992, everyone was confused: was he there to save President Kennedy? Nope. Turns out Sam exists in an alternate timeline where Oswald shot JFK and Jackie; meaning, in this “new” timeline, Jackie lives. The existence of this episode gets weirder when you learn that the creator of Quantum Leap — Donald P. Bellisario— actually served in the Marine Corps with Lee Harvey Oswald in real life. Apparently, this episode served as Bellisario’s rebuttal to conspiracy theorists. Which is wonderful. Nah, there wasn’t a conspiracy, it was just some crazy time-travel paradox designed to save Jackie. Obviously.

2. The Smoking Man Kills JFK in The X-Files

3. Magneto Tries to Save JFK in X-Men: Days of Future Past

When Wolverine travels back in time to his own body in the 1970s, he and Professor X enlist the help of Magneto to prevent the Sentinels from killing all the X-Men in the future. But, it turns out Magneto has been imprisoned underneath the Pentagon for the murder of JFK. But here’s the rub: Magneto didn’t kill JFK at all. He was actually trying to save the slain President because John F. Kennedy was in fact, a secret Mutant and would have probably pushed for more legislation to protect them. This explains all the confusion with different shots and the inconsistent trajectories of the bullet. Magneto can manipulate metal with his mind, but sadly, wasn’t successful. What was JFK’s Mutant power? Days of Future Past never tells us, but maybe he could move metal with his mind too?

In this contemporary time-travel thriller, Stephen King suggests an unexplored side-effect of certain kinds of time-travel missions: you might like the past better than the present. Though he’s from the early 21st Century, Jake Epping falls in love with a woman named Sadie when he travels back in time to 1958. Though he’s supposed to save JFK, the threat of losing Sadie in the process complicates his goals. More than one alternate timeline is created here, and King even published an alternate ending for the novel on his website, which is son suggested actually become the “real ending.” Meaning, there’s a small, real-world alternate timeline swirling around a book about alternate timelines.

5. Philip K. Dick Believed He Could Have Prevented JFK From Being Killed

In one posthumous work by Philip K. Dick — Radio Free Albemuth — an alternate history exists after JFK is assassinated in which aliens are controlling the minds of various people in the government. The evil President Ferris F. Fremont’s rise to power in this universe is implied to be a direct result of an alien conspiracy that may have begun with JFK’s death. But, this book isn’t even the most interesting detail about JFK’s death as it relates to Philip K. Dick. Famously, Dick was a huge believer in using the I-Ching to predict the future. And in his letters, Dick reveals that he and his wife were informed by the I-Ching that Kennedy would be killed: “My wife and I own a 4,000 year old oracle called the I-Ching; just before Kennedy’s election we asked it what sort of President Kennedy would make. It’s answer: no kind, since he would be assassinated. My wife wanted to write Mrs. Kennedy and warn her, but I persuaded my wife that we were a couple of nuts and ought to forget it.” Dick’s beliefs were often stranger than his science fiction, but in this case, if he was telling the truth, also eerily prescient

6. Artist Posits JFK Faked His Death In Order to Hunt Aliens on the Moon

The popular artist “Sharpwriter” has created a slew of striking images depicting U.S. Presidents doing all sorts of cool sci-fi and fantasy stuff. For his JFK piece, Sharpwriter decided that the slain president wasn’t killed at all, but instead, continued a different career path on the Moon where he hunted aliens. The art piece tells the whole story: JFK rides a robot unicorn on the surface of the Moon. Sadly, this image will probably not be confirmed to be true by the JFK Files anytime soon.

After the box office bomb of Star Trek: The Motion Picture in 1979, various concepts were floated as possible premises for the sequel. Easily the most notorious of these was the treatment penned by Trek-creator Gene Roddenberry himself. In it, the Klingons time-traveled back to Earth’s past and prevent JFK from being killed. This requires the Enterprise to go back in time and restore the timeline by having Spock himself become the mysterious shooter on the grassy knoll. Because of the obvious poor taste of this story, Paramount Pictures rejected it outright. And, because this movie was never made, it obviously doesn’t really count as a sci-fi explanation for JFK’s assassination. But, because there are so many alternate universes in sci-fi, and Star Trek specifically, it feels like Spock did do this in some dimension, somewhere.

Read Next: What Are the JFK Files?