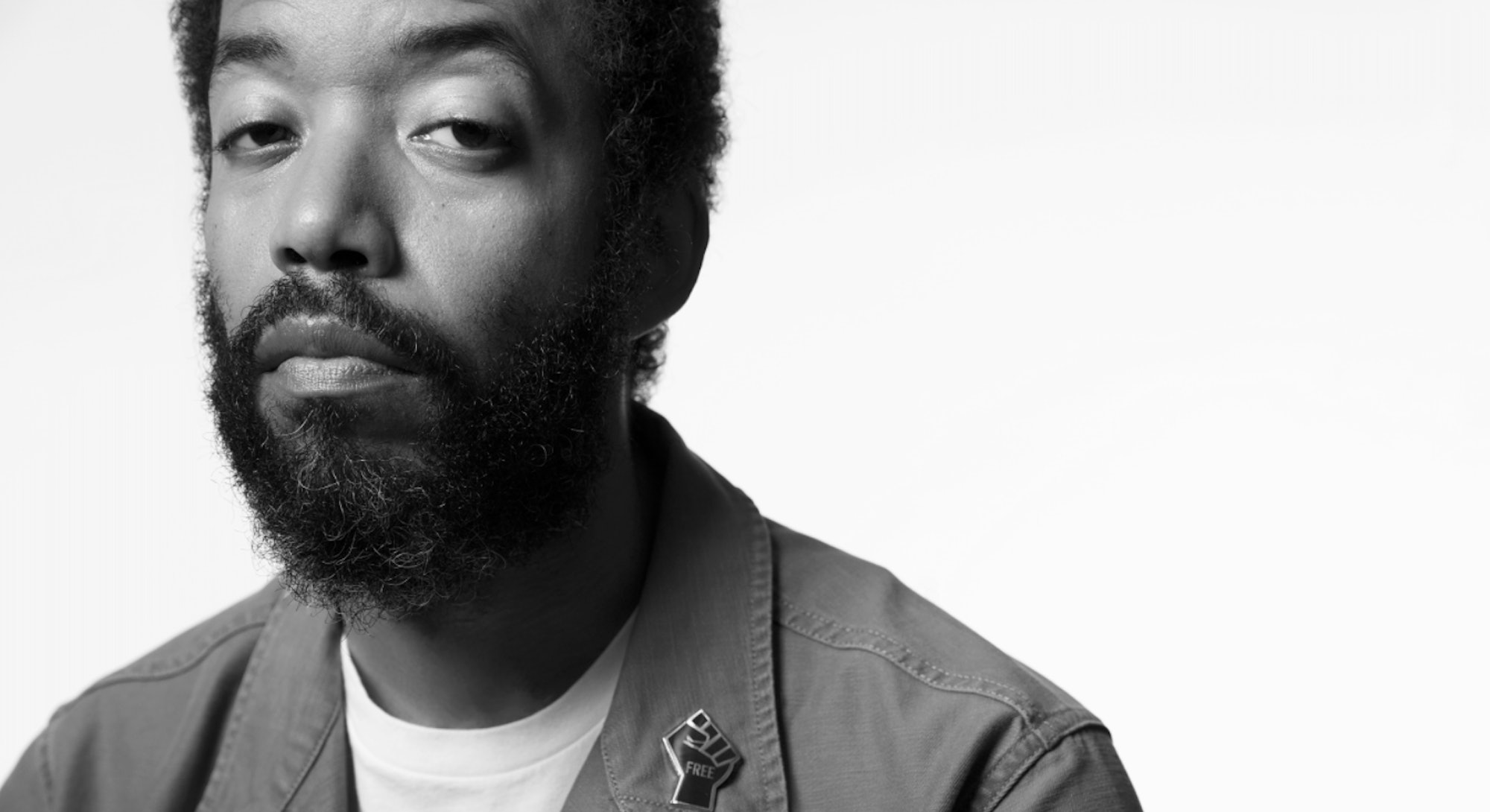 Every comedian has their sitcom. Jerry Seinfeld had Seinfeld, Bob Newhart had The Bob Newhart Show, Louis C.K. had Louie. Even Master Of None has real-life roots from Aziz Ansari. But Wyatt Cenac, the Brooklyn-raised comic known for his four-year stint on The Daily Show, says he didn’t have a semi-autobiographical sitcom to pitch to TV networks in Los Angeles. “I didn’t have anything beyond, ‘I’m a guy who lives in Brooklyn,’” he tells Inverse. Now, he still kind of doesn’t, but his new web series aka Wyatt Cenac is pretty close. But instead of being a stand-up comic, Wyatt Cenac has made himself into a superhero.

Streaming for free on the digital platform Topic, the six-episode aka Wyatt Cenac stars Cenac as a New Yorker who moonlights as a superhero, the Viceroy, in gentrified Brooklyn. Accompanied by his “sidekick” Penny (Emily Tarver, Orange Is the New Black), who drives their mobile base of operations — disguised as a food truck, natch — and Thomas Fowler as Felix, the original and now retired Viceroy who mentors Wyatt (though he usually fails), the Viceroy triest to take on criminals and thieves who prowl the streets. But more often than not, the Viceroy ends up fighting careless parents bringing babies into bars and the arrogance of small businesses like “artisanal mustard shops.”

The show is mostly Cenac’s take on the “semi-autobiographical, ‘My life in New York’-type of show” without actually being one. “I didn’t feel like I could do it because we were at the peak of that a few years ago,” he says in a phone interview prior to the show’s launch. “There are a lot of shows that follow that model. I didn’t want to do that.”

“I’m definitely the beneficiary of Disney saturating the market with comic book movies.”

So when Cenac, who also stars on the TBS sitcom People of Earth, had the opportunity with Topic, he finally asked himself: “What’s a job similar to a comedian where he works, people don’t really know what it is that you do, and who you are in the job is not necessarily who you are outside?”

It soon struck him: “The answer to me was ‘crime-fighting vigilante.’”

Behaving more like a mumblecore comedy than most comedian-led sitcoms, the show’s punchlines don’t aim at anyone or anything but the strange circumstances that lead Brooklynites to collide. aka Wyatt Cenac isn’t menacing or mean-spirited in its satire. Instead, like a true superhero, it posits the radical, brave idea that maybe we can all get along if we try.

A childhood fan of comic books and superhero movies, Cenac created aka Wyatt Cenac to be his stab at what every successful comic seems to do. He also wanted to do something different, feeling compelled to take on the ever-changing face of Brooklyn, his home, and what it means to be a black vigilante.

Is every comedian expected to have their own autobiographical sitcom?

I think it’s an easy question to ask a comedian. Doing stand-up, your persona on stage is you. Whether it’s a version of you or a version of you that you present, it’s you, on stage, by yourself. The model that is best represented by shows like Seinfeld and Louie, where we see comedians on stage talk about something, then we see them off-stage in their “real” life and how their real life affects their onstage persona. I didn’t want to do that.

Superheroes are incredibly popular. How did the mainstream recognition of Marvel and DC influence the way you approached aka Wyatt Cenac?

Superhero movies have filled the void left by Westerns. There was a time when the biggest movies and big TV shows were Westerns. It was John Ford, Bonanza, Rawhide, and John Wayne. In an odd way, superheroes are the new cowboys. I don’t know if Blazing Saddles could have existed had there not been the amount of Westerns in people’s consciousness. I’m not comparing this to Blazing Saddles, but in a similar way, I don’t know if this idea would resonate or would have been as easy to get across had we not been at the place we are at now. I’m definitely the beneficiary of Disney saturating the market with comic book movies.

Like how Batman protects Gotham, the Viceroy saves gentrified Brooklyn. This is a comedy, but there are serious issues regarding gentrification. What did you want to say in your show about Brooklyn’s changing face?

With any gentrification that happens, whether in New York or Nebraska, there’s always going to be a push and pull between the people who are coming in and the people who have been there. In certain places that push and pull is lessened because there is more communication and empathy across both sides, especially by those moving in with the opportunity to change something. If anything, it’s empathy. A little more understanding and trying to listen.

From the outside, you’re an established comedian with an influential show. What was the reality of getting your own show picked up actually like?

It was a challenge. [aka Wyatt Cenac] was something I tried to find support for and I’m appreciative the folks at Topic were up for the challenge. Unless you got the money to do it yourself, there’s always a hill to climb. You realize that the business really limits opportunities. You don’t take into account: This network has a budget, they have select number of programs they wanna make, and of those they want to target specific audiences they can sell ads to. All of a sudden you start asking, “Do I check all those boxes? Do I fit in the network aesthetic of what they’re trying to do?”

I sold a pilot to Comedy Central and they passed. I was bummed out, but I remember talking to an executive and he said they bought like, 16 pilots, and they have three to four hours. He broke down the numbers: An hour is Daily Show and Colbert. You’ve got Tosh.O, South Park. He goes through the numbers. By the time he’s done, you’ve got one hour. Two shows. They bought 16. Two are gonna make it. There was a part of me that couldn’t get offended. You realize [as a creative] you’ve gotta fill this slot. Is your show complementary to this other show in the time slot? It’s not? It’s not gonna go.

In one particular scene, the Viceroy is mistaken for being white. What was the root of that joke?

The worst thing as a comedian is if the people you want to laugh aren’t laughing but another group entirely thinks its hilarious. That’s one of the weirdest challenges, laughing for the wrong reasons and who is consuming what you’re doing. Making the character a vigilante is a way to have those conversations, even recontextualize those insecurities in a different way.

That scene with those kids was a fun way to recontextualize that stuff. Yeah, getting to talk about race as it relates to being a vigilante, but there’s also how people see race as a performer. There are these ideas of which pool we can swim in, that comedy or music or any type of performance is categorized as black. That it can only exist in certain ways to certain people. Being able to talk about it through this vigilante character, there are so many things in the spectrum that we don’t need to be limited. We’re not a monolith. That’s something that, as challenging as it is for other people to accept, it can also be challenging for us to accept it.

Are you aware of the real-life superheroes who populate certain cities of America? Did those people influence aka Wyatt Cenac in any way?

I’ve seen a documentary, I believe HBO, about some of them. I was curious to see what level of vigilante activity they took part in. For many, it’s more community service. For me, I was trying to think of the comic book version of vigilantes, [who] have some kind of fluid relationship with law enforcement. And then there was the other thought of, ‘How does one monetize this?’ Years ago I’d written a sketch, part of an SNL submission, the premise was somebody getting mugged and Spider-Man shows up and starts to get in a bidding war with the woman getting mugged. It’s kind of becoming like a contractor, “I can’t do this for free. Web fluid costs money.”

It was this thing of, is there a way someone could monetize something like that? I started thinking about the rewards I always see, ads like, “If you give information that leads to the prosecution of a suspect, you’ll get a hundred bucks.” I thought if there’s an economy for something like that. What if I took it to a more fantastical place?

aka Wyatt Cenac is streaming now on Topic.