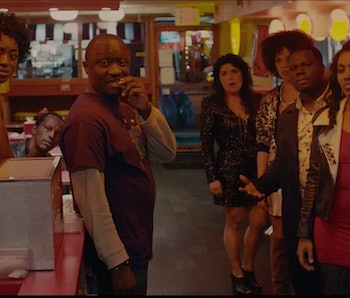 In a homage-studded second season of Master of None, the one episode that seems to directly parody the rom com it shares a name with, in fact, has nothing to do with the movie at all. In an interview with Inverse, co-showrunner Alan Yang revealed the true inspiration of “New York, I Love You.”

“We just liked that title; it’s similar to a song title by the band LCD Soundsystem, who are actually friends of ours,” said Yang.

“I texted James Murphy from that band, saying ‘Hey we’re thinking of using this as an episode title for one of our episodes,’” Yang continued. To Yang and Ansari’s delight, Murphy was game to be part of Master of None Season 2.

Yang laughed, recollecting what was perhaps the one easy decision made during the making of the second season. “He was like, ‘yeah, totally works for me,’ and was so cool about it.”

Ironically, LCD Soundsystem’s “New York, I Love You But You’re Bringing Me Down” doesn’t play during the episode. Perhaps because the song, a perfectly salty salute to the shittiness of this great city, ends on a significantly more bittersweet note than the episode, which is a daring experiment on whether Master of None could pull off an episode without its main characters. But the more likely reason is that Murphy knew he couldn’t compete with the song that truly captures “New York, I Love You”: the Six Flags song (We Like To Party!).

Catch the Venga bus to Netflix where Master of None’s second season is now streaming.

More like this
Entertainment
5.18.2022 7:00 AM
Stranger Things cast unpack a "quite metaphorical" Season 4
By Eric Francisco
Entertainment
23 hours ago
'Umbrella Academy' Season 3 release date, trailer, cast, and plot for the Netflix superhero series
By Mae Abdulbaki and Mike Bloom
Entertainment
5.18.2022 9:36 PM
Kate Siegel says Netflix’s Fall of the House of Usher is “like nothing anyone has ever seen”
By Dais Johnston
Related Tags
Share: