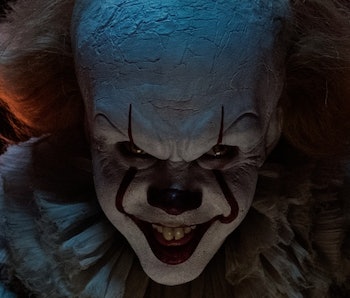 The creepy smile, the freaky movements, the scary mouth of teeth — Pennywise the Dancing Clown was ready-made to be a thing of nightmares and Halloween characters. But this is the first Halloween after the reprise of It premiered in theaters in September, meaning there’s fresh inspiration for all you twisted people out there looking to dress up and scare the shit out of your friends and families.

Imitating the costume and intricate makeup that Pennywise sports in the movie won’t be as simple as buying water-based face paint like the clowns at children’s birthday parties wear, says professional clown Tom Mayes. Professionally known as “Macaroni the Clown,” Mayes says that the traditional, non-terrifying clown he portrays simply wears a layer of greasepaint on his face — Mehron makeup is preferred by most — then covers it with baby powder to make the paint stay on while he’s at a gig.

However, Mayes says that his caked on paint easily comes off his face as he performs and moves around, making it an unlikely choice for Pennywise’s makeup. Mayes makes a clear distinction between professional clowns like him who use paint to comically exaggerate features and draw laughs, and the theatrical Pennywise who wears a “horrifying, scary mask,” meant to entirely change a persona.

The average person likely doesn’t have the resources or interest in air brushing their Halloween makeup or hiring a professional makeup artist to paint their face in detail. However, YouTube is already filled with step-by-step makeup tutorials explaining how to best look like Pennywise. Some videos go all out with liquid latex to change head shape and mouth size, but this demonstration is manageable enough to follow if you’re not trying to spend a fortune:

The tutorial gives a good idea of what has to go into this look. In terms of costume, here are some of the pieces you’ll need to create your most perverse, insane Pennywise.

The most important aspect of the costume is arguably Pennywise’s face and its makeup. Pennywise’s hairline is incredibly far back to highlight how big his forehead is. A bald cap will be easiest to paint over when you do your white makeup. You can buy a bald cap for $10 at Party City or $7 on Amazon.

Pennywise’s absurd orange hair is likely easiest to replicate with a cheap orange wig you can find online (Amazon has a bunch of options for under $15, like this one and this one. It’s easy enough to cut it short and style it with a bunch of hairspray to stick straight back like in the movie.

If $12 is a little steep for you, the cheaper (but not as well executed) option is to buy one of those hairy headbands people wear to sports games and position it to stick straight back.

White face paint is essential for Pennywise’s makeup and luckily, it’s available just about everywhere this time of year. This is going to go all over your face, all the way to the hairline of the wig and even over your eyebrows. Professional clowns prefer to use Mehron-brand face paint, but you can find cheaper alternatives for a few dollars at Party City, Target, Walmart, and likely your neighborhood drug store.

Liquid lipstick is going to be essential for creating in detail Pennywise’s sinister smile, red nose, and red lines that go upwards from his mouth across his eyes. A local pharmacy is likely to have a cheap version of what you want. Look for ColourPop’s $6 Ultra Matte Lip in Creeper; L’Oréal’s $10 Pro-Matte Gloss in Shanghai Scarlet; Elf’s $5 Liquid Map Lipstick in Red Vixen; or BH’s $6 Liquid Lipstick in Charlotte.

To complete the makeup, any black eyeshadow will work to make the black shadows around Pennywise’s eyes and draw on the faint skinny eyebrows that loop over them. Again, find it for a few bucks at a nearby Target, Walmart, or any pharmacy.

These will likely be your most expensive purchase for the costume. Pennywise has these bright piercing yellow eyes in the film, and imitating them requires a pair of color contacts that are safe and won’t irritate your eyes. Color contacts are available online costing between $20 and $25.

Pennywise’s costume could be difficult, because it’s devoid of color unlike a regular clown costume, but incredibly intricate. Don’t worry: the face should be enough of a hint to what you are, and it’s easy to simplify the look’s main features. Ideally you can find a white long sleeve shirt and white pants or leggings, so you’re not showing any skin. Don’t wear anything too nice — you’ll have to stick things on the shirt and it could get dirty chasing terrified trick-or-treaters down the street.

Pennywise isn’t technically human, and he doesn’t show a single piece of skin. You can find white gloves for a few dollars, like these at Party City and on Amazon, that will cover up your hands.

So for the details of Pennywise’s costume: they’re virtually unmatchable unless you buy a replica of the Pennywise costume for $60 or more — and also a lot less fun. It’s simple enough to make the clown collar around Pennywise’s neck with a cheap frilly tutu. They’re available for $20 at Party City, but you may be able to find a cheaper one at a costume shop or local Halloween store.

Pennywise has three red pom pom-like buttons on the front of his clown costume. Any store with crafts — Michael’s, Hobby Lobby, or Target — will have a pack of these for $1 or $2. They’re easy enough to tape or pin onto your shirt to accompany your Pennywise look.

It’s impossible to have a completed Pennywise look without the iconic red balloon that follows around his victims. You could probably just go for the face makeup and balloon, and be recognizable enough. However, make sure you’re practicing your It voice so you can tell the George you know: “They all float down here, Georgie.”

If you liked this article, check out this video on why an important monster from Stephen King’s book was left out of the movie It.