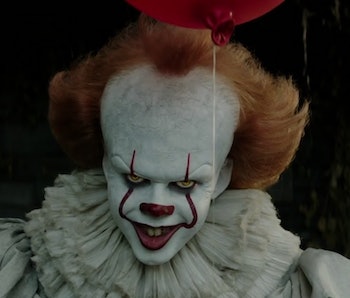 Pennywise the Dancing Clown demonstrates his immense power in thrilling ways in the new It, but nowhere is that power on greater display than at the box office where the film has officially become the highest grossing horror film of all time.

As of September 21, Box Office Mojo confirms the latest It adaption has grossed $236.3 million in ticket sales in only two weeks, and it will likely earn much more before it leaves theaters. The Exorcist previously held the record with a total domestic lifetime gross of $232.9 million, so It will likely widen the gap considerably in the coming weeks.

That being said, if you adjust The Exorcist’s earnings for inflation — it came out in 1973 after all — then that translates to $983.3 million in 2017 dollars. So It still has a long way to go if it hopes to outsell the classic film about demonic possession.

But for now, in the war between Pennywise the Dancing Clown and Pazuzu, it looks like Pennywise is winning.

This all comes after an opening weekend that smashed records for horror movie openings, and the film also quickly became the highest-grossing Stephen King film of all time. Sorry, Dark Tower.

It is out now in theaters.

Check out this video to find out why an important monster from the book It was cut from the film.