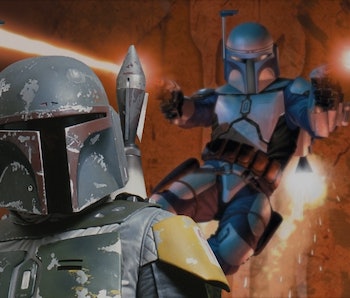 The explosive but still totally unconfirmed Boba Fett standalone film — the one that Lucasfilm is considering alongside a Yoda standalone — got Star Wars fans more riled up than ever. In fact, they’ve gotten so excited that they’ve figured out a way to (kind of) reunite Boba with his father, Jango Fett.

Boba Fett is one of the most enduringly popular characters in the Star Wars universe despite his minimal role in the original trilogy. In fact, he was so popular that he got his own origin story in the prequel trilogies.

In the prequels, Star Wars fans learned that Boba was the cloned son of Jango Fett, a legendary Mandalorian bounty hunter who was used by the ‎Kaminoans as their muse for the clone troopers. One of those clones (who obviously looked exactly like Jango) was Captain Rex, a captain in the Grand Army of the Republic and a friend of Obi-Wan Kenobi’s in Star Wars: Revenge of the Sith. Both Jango and Rex (as well as, y’know, the rest of the clones) were portrayed by Temuera Morrison.

Reddit user Echo1201 posted a collection of images and screenshots to r/StarWars on Tuesday that perfectly sum up how Morrison could reappear in the Star Wars universe. In the screenshot, user spectre_5 writes: “After fighting his way out of the Sarlacc pit, Boba Fett goes on some kinda soul-searching journey, along the way meeting an old Rebellion soldier that reminds him of his father.”

And user concrete_isn’t_cement added that Morrison has “proven he can rock the Old Man Rex beard” before in a previous role.

The post points to one of the Rebellion soldiers seen alongside Han Solo on Endor in Star Wars: Return of the Jedi, an older man with a heavy white beard. This man looks pretty similar to how Rex appeared in the Star Wars Rebels animated series; some fans have even speculated that Lucasfilm intentionally made the animated, older Rex look like a random Rebellion soldier as a sort of Easter Egg.

And Morrison has said (as pointed out in the post), “What’ll make me really happy is if I get the phone call asking me to play another character — and older Captain Rex or something.”

It seems the pieces are all there. The fans have it figured out. Now, Lucasfilm and Disney just have to do something about it.