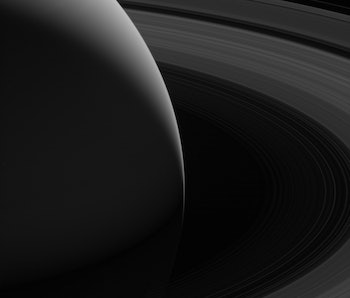 Though the debate about which planet reigns supreme has been over for some time, occasionally, people need a reminder that Saturn is number one. The latest proof comes from a newly released image of the gas giant, which NASA’s calling “The Grace of Saturn.” Do you remember the last time Mercury got a poetically titled photo like that? Of course not — it doesn’t exist.

The image was taken by NASA’s Cassini spacecraft on August 12, 2017, about a month before mission end. It was snapped roughly 581,000 miles (935,000 kilometers) from Saturn, giving a great perspective on the sunlight reflecting off Saturn’s icy rings. According to NASA, this gap — positioned between the planet’s D ring and its cloud tops — is the chasm Cassini dove through 22 times during its Grand Finale. It’s a piece of the spacecraft’s history that we can all cherish forever — can the same be said about the first planet from the sun?

Folks with extremely good eyesight can have some fun trying to find Saturn’s moon, Pandora, hiding in this pic. The “potato-shaped” moon is about 88,000 miles (142,000 km) away from Saturn and hugs the planet’s F ring. In this pic, it appears as a speck in the upper-righthand corner.

NASA hasn’t formalized any plans to return to Saturn, so for now, we’ll have to settle for staring at Cassini’s final images like this one. As the agency pours through the plethora of pictures and data the spacecraft left behind, hopefully, it’ll be inspired to plan a return trip.

“We left the world informed, but still wondering, and I couldn’t ask for more,” Cassini project manager Earl Maize, of NASA’s Jet Propulsion Laboratory in Pasadena, California, said at a news conference back in September. “We’ve got to go back — we know it.”

It must be hard to be a small, uninspiring planet in the same solar neighborhood as Saturn. But hey, we can’t all be winners.

More like this
Science
8.2.2022 12:15 PM
Look! NASA publishes new image of a fast-flying star ejected by a supernova
By Doris Elín Urrutia
Science
8.7.2022 11:00 AM
Webb Telescope discovers an “amazing” galaxy from the edge of time
By LAURENCE TOGNETTI and Universe Today
Science
8.6.2022 11:00 AM
450 million years ago, Earth’s magnetic field almost collapsed — the results would have been apocalyptic
By CAROLYN COLLINS PETERSEN and Universe Today
Related Tags
Share: