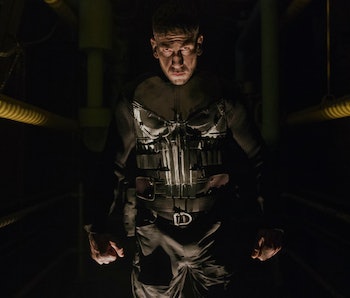 As many gear up for Thanksgiving, Black Friday, and beyond, Netflix will be adding a bunch of exciting Originals to their line-up.

In November, Netflix will bring big live-action series like The Punisher to the platform, along with another adaptation of Margaret Atwood’s works with Alias Grace, and Scott Frank and Steven Soderbergh’s western series Godless. Meanwhile, there’s Stretch Armstrong & the Flex Fighters and the anime Fate/Apocrypha for lovers of animated fare. And documentaries like Jim & Andy: The Great Beyond* are on the way.

There should be something for everyone among Netflix’s new 2017 November Originals. If you had to watch one first it should probably be Punisher, if only because other Marvel shows on Netflix have been such a hit with audiences, and to see if it’s able to tackle gun violence in a thoughtful, meaningful way. For your second choice, maybe try Alias Grace, because of the Atwood name and the success of The Handmaid’s Tale. If those don’t suit you, there’s always the Spike Lee-directed She’s Gotta Have It series, which is based on his 1986 film of the same name.

After the death of their talent firm’s founder, four agents struggle to keep the company in the clear.

Based on the novel by Margaret Atwood, which took inspiration from a real murder case, Alias Grace is about a woman (played by Sarah Gadon) who was convicted of murder as a young girl, and who claims to have no memory of the event. A psychiatrist has to decide if she should be pardoned or not. Sarah Polley adapted Atwood’s book for the series, which was directed by Mary Harron.

Hosted by Great British Bake Off winner Nadiya Hussain and radio personality Zoë Ball, families with a love for food compete for the title of Britain’s best home cooks. They are judged by chef Giorgio Locatelli and cookery teacher Rosemary Shrager.

Fate/Apocrypha takes place in a parallel world to Fate/stay night, and focuses on the conflict between the Red and Black magic factions. The first season is already being added Netflix Japan as it airs.

Using the power of science and technology, a group of spies save the world in this series.

This series is a live-action adaptation of Kazuhiko Shimimoto’s manga Blazing Transfer Student. It will be a sequel to the original story, which focused on a Japanese teenager who transferred to a school where every dispute is settled by fighting, centered on that aforementioned student — who’s now the principal of a high school he established — and the seven students he recruits for a high stakes mission. The seven members of the Johnny’s West singing group will star in the series.

In this anime, a team of heroes fight to protect Earth and the magical world of Splendorious against the evil forces of King Mercenares.

Lady Dynamite is inspired by and stars comedian Maria Bamford as a woman struggling to figure things out.

There’s no information available at this time for Mea Culpa.

In this Brazilian film, which is also known as O Matador, a killer (played by Diogo Morgado) tries to find out what happened to the bandit who raised him after he disappears.

DeRay Davis: How To Act Black

DeRay Davis talks being a black man in showbusiness in this comedy special.

A Christmas Prince follows a New York-based journalist (played by Rose McIver) who travels to Eastern Europe to cover a royal event.

Actor and comedian Jim Carrey played his idol Andy Kaufman in the 1999 film Man on the Moon. Using set footage and a present day interview with Carrey, Jim & Andy sees the actor reflect on the crazy experience and life in general. The documentary is directed by Chris Smith.

The sixth and final season of Longmire sees Henry Standing Bear (Lou Diamond Phillips) kidnapped, and Sheriff Walt Longmire (Robert Taylor) wonder if he’s been sheriff for too long. It is based on Craig Johnson’s Walt Longmire mystery series.

A young girl finds adventure in Amazia, a world she’s able to access with the use of her toy chest. This animated series is produced by Saban Capital Group and Cirque du Soleil Media, and is inspired by the worlds of the Cirque du Soleil brand.

Based on Hillary Jordan’s novel of the same name, Mudbound follows two men who return home from World War II, only to have to deal with racism and life after war. It stars Garrett Hedlund and Jason Mitchell as the two men.

Shot in the Dark: Season 1

There’s no information available at this time for Shot in the Dark: Season 1.

Lucky, her friends, and their horses continue their adventures.

Beat Bugs: All Together Now

Beat Bugs centers on five bugs who play and learn in their backyard. All Together Now is a Netflix special, which will see the bugs heading outside their backyard to attend a talent show.

Brian Regan’s upcoming comedy special is all about dad humor.

In this documentary from Jacob Kornbluth and Sari Gilman, professor and former Secretary of Labor Robert Reich discusses the ideas of his book, Saving Capitalism, with people in America.

Set in the American West, an outlaw’s hunt for a former partner leads him to a town made up entirely of women. Godless was created by Steven Soderbergh and Scott Frank.

She’s Gotta Have It: Season 1

She’s Gotta Have It centers on Nola Darling (DeWanda Wise), a woman juggling her professional and social life. It’s based on the 1986 film of the same name by Spike Lee, who is directing every episode of the series.

Cuba and the Cameraman

In Jon Alpert’s documentary, the life of Fidel Castro, the former President of Cuba, and the effect of his administration on three Cuban families over four decades is examined.

Declan Harp (Jason Momoa), a part-Irish, part-Cree outlaw, is one of many trying to break the Hudson’s Bay Company’s hold over the fur trade in Canada.

The Many Faces of Ito: Season 1

A romantic comedy writer pretends to dole out advice to lovestruck women, while actually stealing their experiences for her writing.

Trailer Park Boys: Out of the Park: USA: Season 1

After heading to Europe, the Trailer Park Boys are traveling around the USA in this new season of the mockumentary series.

Glitch revolves around police officer James Hayes (Patrick Brammall) and seven people who have risen from the dead. In the second season, the formerly deceased learn why they came back, but soon have to contend with a dangerous new threat.

Japanese teenager Nao (Haruka Fukuhara) continues sharing an apartment with the most popular boy in school, Uehara (Shun’ya Shiraishi). It is based on the shojo manga of the same name by Yue Takasuka.