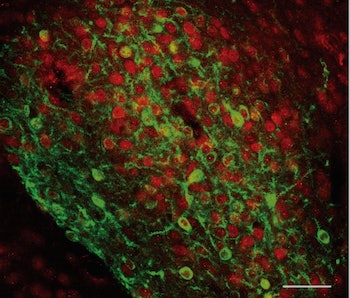 When you’re born, your brain is set up with all the physical abilities it needs to do everything it will ever do during your lifetime. But that’s not quite enough. Your brain needs experiences to shape it, building and reinforcing connections that give rise to memories and knowledge. This is true for learning how to ride a bike, memorizing state capitals, and even learning how to be afraid. Scientists have long thought they understood the neuroscientific root of aversive learning — the connection between a sensory stimulus and the brain’s perception of a threat. New research is changing this commonly accepted picture of the brain, though, potentially rewriting neuroscience textbooks.

In a study published Monday in the journal Nature Neuroscience, a team of scientists performed a series of experiments on mice to explore how the brain responds to uncomfortable feelings to build and reinforce aversive learning processes in the brain. Their specific focus was on the amygdalae, two small brain structures that are involved in learning and memory. Whereas scientist have long understood that the lateral amygdala was primarily responsible for aversive learning, this study shows that the central amygdala may actually be the seat of this process. These findings could change the way we treat psychological conditions like post-traumatic stress disorder (PTSD).

“If the conventional view was correct, you should see normal levels of activity in the lateral amygdala — where the activity supposedly begins. But this wasn’t the case,” said Li in a statement.

In one particularly strange experiment, the scientists actually implanted aversive memories that had never happened in the mice’s brains. They did this with a laser that activated PKC-delta neurons in the hopes of creating a false memory of an uncomfortable event.

“This causes no pain to the mice, but they don’t like it — it makes them feel uncomfortable, just as getting a mild shock makes them uncomfortable. It’s the kind of stimulation that leads to an aversive memory, the kind you learn from,” said Li in the statement.

The mice were given the neural stimulation in a cage with two chambers, and when given the option to wander around the cage, they avoided the chamber in which they had received the laser stimulation. This suggests that activating the PKC-delta neurons had indeed created a false memory and that these aversive memories are controlled to some degree by the PKC-delta neurons in the central amygdala.

The researchers call these neurons “fear-on” cells, and they hope that their research will help scientists better understand how patients with PTSD can have fear memories triggered by unrelated stimuli so they can be treated more effectively.

If you liked this article, check out this video of LSD’s effects on the brain.

More like this
Science
6.26.2022 11:00 PM
The powerhouse of the cell has a more complicated origin than we thought
By Viviane Callier and Knowable Magazine
Science
6.18.2022 10:00 AM
Can you upload your brain to a computer? A neuroscientist explains the crushing reality
By Guillaume Thierry and The Conversation
Science
6.28.2022 10:00 AM
How are drugs absorbed in the body? The science of medicine, explained
By Tom Anchordoquy and The Conversation
Related Tags
Share: