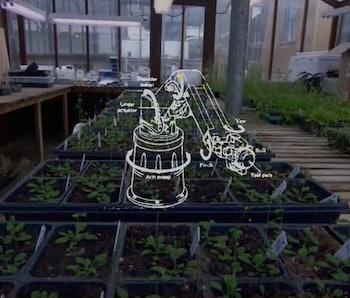 The Salk Institute may have cured polio in its heyday, but these days it needs help funding its research endeavors.

The San Diego-based nonprofit science hub is seeking $313,840 through crowdfunding efforts in order to get its smart seed-planting #Salkrobot farming. The project, courtesy of Salk plant biologist Wolfgang Busch, is meant to make costly and experimental “precision planting” possible.

Busch and his team want to use the funds to test hundreds of variations in their lab to cultivate the most nutrient-dense, effective plants possible.

“I believe a better understanding of root systems can help scientists grow more resilient food sources. This is an increasingly urgent problem in the face of the planet-shifting climate, and extreme environments, such as drought.”

The crowdsourcing project also says the robot can do as many experiments in a single day as a human researcher could in five weeks.

While crowdfunding in science has become prevalent amid federal funding cuts, Salk may be suffering enough internally to need the public’s money, as [The San Diego Union-Tribune reported].(http://www.sandiegouniontribune.com/news/science/sd-me-crowdfund-robot-20171019-story.html)

The #Salkrobot has a long way to go to reach its crowdfunding goal — it’s got until November 30 to raise the entire amount.