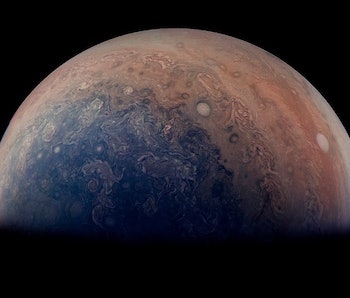 Despite being the Large Adult Son of the solar system, there’s still so much we don’t know about Jupiter. While NASA’s Juno mission has been able to uncover some of its mysteries, there’s still so much about the planet’s infamous storms that has yet to be explained. But according to new research from the space agency, we might finally know how deep Jupiter’s intense winds extend.

Perhaps Jupiter’s most obviously spectacular feature is its zonal winds, which we see as colorful bands. The reality is that these winds are not as placid as they seem — according to a team of researchers, they might extend up to about 1,900 miles (3,000 kilometers) into Jupiter’s interior.

Until now, it’s been a mystery how deep Jupiter’s violent winds reach. We know they blow in different directions — some east, others west. But according to the international team, which announced their findings earlier this week at the American Astronomical Society’s Division for Planetary Sciences meeting, these are no shallow storms.

New Juno data reveals that Jupiter’s gravitational field is tilted, which results in unusual wind patterns in its Northern and Southern hemispheres, Nature reports. Juno has detected gravity signals that suggest its zonal winds could extend thousands of kilometers down, and that there might even be layers of winds within Jupiter’s interior that are moving at different strengths. Jupiter, like onions — and ogres — has layers. Of winds, that is. Maybe.

Currently, Juno scientists are trying to figure out how deep Jupiter’s Great Red Spot might extend. It’s easy to forget how utterly chaotic Jupiter is, because it’s so painfully resplendent. But it’s good to remember that Jupiter truly is a literally hellscape, albeit a beautiful one.