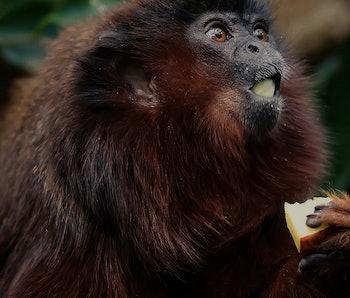 Jealousy isn’t typically seen as a virtue, but new neurobiological research suggests it likely played an important role in the evolution of monogamy, which many consider virtuous. Jealousy is a powerful emotion that ignites specific parts of the brain, and causes the body to undergo hormonal changes — indications that neurochemistry drove a convergent evolution between relationships and jealousy.

“I don’t think that jealousy is the origin of monogamy, but I do think that it is important to its continuation,” Karen Bales, Ph.D., a neuroscientist at the UC Davis Primate Research Center, tells Inverse. “Jealousy works to protect a pair bond by excluding potential rivals.”

Bales says that in titi monkeys, found on the continent of South America, “males sometimes even physically hold their partner back from interacting with a strange male.”

Bales and her team explain in a paper released Thursday in Frontiers in Ecology and Evolution that they studied the demonstration of jealousy in male titi monkeys, socially monogamous animals who have a preference for a familiar partner, and show distress when separated. In these early stages of understanding the neurobiology of jealousy, animal models are the best way to investigate — it’s tricky to induce jealousy in the laboratory in humans.

During the 30 minutes that the monkeys either watched their preferred partner or a pair of strangers, their brains were scanned and the researchers measured the levels of hormones associated with pair bonding and mating-related aggression. Subsequent analysis revealed that the monkeys who were jealous — or at least, an approximation of what jealousy may look like in monkeys — had heightened activity in their brain’s lateral septum and the cingulate cortex. These are the parts of the brains associated with the formation of pair bonds and social pain, which the researchers say indicates that jealousy does dually induce the emotions of social rejection and drives the need to maintain the pair bond.

The male monkeys who spent more time looking at their mate next to a strange male also had higher rises in cortisol, a stress hormone, and testosterone. This increase was expected because testosterone is typically associated with mating-related aggression.

Because the neural basis of jealousy in humans is not well understood, this study is a positive step towards understanding its origin and purpose. Bales explains that for titi monkeys, there are advantages that come with jealousy — like humans, a dissolution of a titi relationship can put their offspring at risk, and because they share a territory there is better and easier access to resources. And while this research indicates that jealousy served as an advantage to early humans beginning to partner up, understanding it better can explain its darker, disadvantages as well.

“Understanding the neurobiology of social bonds, social communication, and emotion is important because we have to understand the basic biology before we can understand where it goes wrong,” says Bale. “For instance, jealousy can develop into intimate partner violence. Social behavior is disrupted in several other conditions, such as schizophrenia.”