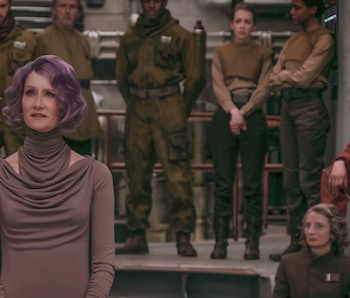 Admiral Holdo is looking poised and confident aboard a Resistance heavy cruiser, even if she had to make-up her own blaster sounds.

On Wednesday, Laura Dern appeared on The Ellen Degeneres Show and briefly discussed her role in Star Wars: Episode VIII — The Last Jedi. When Ellen asked her what she could say “without getting arrested,” Dern replied by saying “absolutely nothing.”

Still, based on Dern’s comments we do know her character does have what she calls “weaponry,” because she actually made “pew-pew-pew” sounds with her mouth during numerous scenes. Dern told Degeneres that director Rian Johnson has already repeated this story numerous times, but that it is true that she unconsciously supplied her own blaster sounds because some of her scenes reminded her of playing Star Wars as a child. Dern isn’t the first Star Wars actor to supply her own sound effects. Both Liam Neeson and Ewan McGregor reported they accidentally made their own lightsaber noises on the set of The Phantom Menace in 1999.

Much of Dern’s new character — Admiral Holdo — is still shrouded in mystery. We know Holdo is a big deal in the Resistance (maybe bigger than Finn?) and that she might not get along with Poe Dameron. It’s also possible she outranks General Leia Organa. Could the two of them be rivals? Will Holdo and Leia go head-to-head? Hopefully, Dern’s pew-pew-pews were aimed at First Order Stormtroopers and not members of the Resistance.

The Last Jedi — complete with sound effects from Laura Dern — opens on December 15.

If you liked this article, check out this video on two huge twists revealed in the Last Jedi trailer.