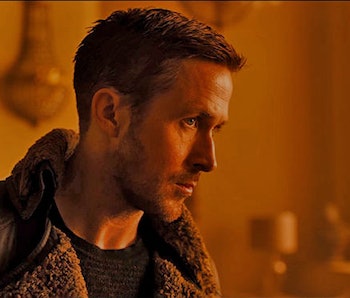 In Blade Runner 2049 Ryan Gosling is a future cop known as K, instructed to obey, who’s on a hero’s quest to determine what in his life is real.

What is reality in Blade Runner 2049 comes with both physical and metaphorical implications, and what K ends up using as his bread trail are his memories. The issue here is that K doesn’t know if his memories actually happened to him, a problem humans have as well.

False memories happen to everyone — the good news for us humans is that we have advanced scientific tools to spot them.

Spoilers below for Blade Runner 2049!

K has learns his memories aren’t real because he’s a replicant — a genetically engineered “biorobotic” being — but he increasingly becomes suspicious of this fact and decides visits Dr. Ana Stelline, a memory fabricator, to ask how can he know for sure. She has the technology to examine his memory, choosing an experience of being chased by boys in an orphanage who want to steal his toy horse.

Upon seeing the memory, she wells up with tears and replies “someone lived this.” K takes her response as confirmation that this memory is his own, but by the film’s end, we learn that her confirmation that it’s real means that it was actually her own.

While we don’t have replicants implanted with memories (yet), humans are also plagued by false memories. Numerous studies have found that while humans may vividly remember things, there’s a chance those memories are false. False memories emerge because of an evolutionarily driven habit to fill in the gaps — the brain can’t always process information at the speed that it’s receiving, and quick inferences are the brain’s way of preparing itself for threats.

“The brain is prepared to make 99 errors to save us from the tiger [a threat],” cognitive neuroscientist Sergio Della Sala, Ph.D., told the BBC. “That’s because the brain is not a computer. It works with irrational assumptions. It’s prone to errors and it needs shortcuts.”

While it’s hard for humans to distinguish what memories are true or false, scientists are increasingly able to identify that difference. That’s because these memories are sometimes processed by different parts of the brain: In a 2007 study conducted by scientists at Duke University, they found that when subjects remembered something that actually happened to them, blood flow increased in their medial temporal lobes. This is the part of the brain that contains the hippocampus, which plays an important role in the formation of long-term memory. When the subjects were confident that their memory happened, but it actually didn’t happen, the brain’s frontoparietal region was ignited instead.

In a similar study a team of Japanese scientists used functional magnetic resonance imaging to determine that neural activity changes when the brain processes true and false memories. Study volunteers were read a list of words, then quizzed later on what words were said. They found that when the volunteers cited a word that wasn’t on the list but felt confident it was, there was increased brain activity in their left temporoparietal regions.

While this doesn’t mean we can absolutely know if a memory is false or not, there are steady advancements towards that possible future. It’s too bad K didn’t come across a fMRI machine before he realized he wasn’t actually a replicant Messiah.

If you liked this article, check out this video of a breakthrough brain-reading device for paralyzed patients.

More like this
Science
November 19, 2022
The most polarizing sci-fi movie on HBO Max reveals the limits of a major tech trend
By Tara Yarlagadda
Science
November 27, 2022
Can I feed my pet only dry food? Why the answer is different for cats and dogs
By Tara Yarlagadda
Science
22 hours ago
This 239-year-old technology could revolutionize astronomy
By Universe Today and Allen Versfeld
Share: