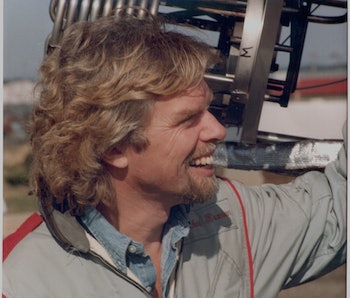 Virgin Group founder Richard Branson was critical of his commercial space rival Elon Musk on Wednesday, suggesting the SpaceX founder is too focused on Mars to think much about how space exploration can benefit the humans back on Earth.

“I think space needs a lot of companies doing different things to benefit the Earth back here,” Branson said in an interview on the CNBC show Squawk Box. “I think Elon’s absolutely fixated on going to Mars, and that is almost his life mission.”

Branson wasn’t entirely negative, of course. He compared Musk’s Mars plans to President John F. Kennedy’s calls for NASA to make it to the moon by the end of the 1960s. But he used the interview to reveal the fundamental difference in how the two billionaires — plus Amazon founder Jeff Bezos, who is behind Blue Origin — think about what space means for humanity.

“I think Jeff and ourselves are more interested in how we can use space to benefit the Earth, because the Earth is, in my opinion, extremely beautiful and needs to be protected,” said Branson. “And we’ve just learned about some of the ways we can protect Earth by using space.”

The interview with Branson on Wednesday morning pointed to some of the ways he hopes to use commercial space exploration to benefit the environment, including using a fleet of satellites to monitor everything from global methane levels to illegal fishing.

Musk has made no secret of why he wants to build a settlement of at least half a million people on Mars. The title of the article he wrote earlier this year in the journal New Space says it all: “Making Humans a Multi-Planetary Species .” On a fundamental level, going to Mars is meant to provide the ultimate insurance policy against a cataclysm destroying Earth. It’s the same principle as not putting all of one’s eggs in one basket, except in this case it’s not putting all humans on one planet.

Such a vision necessarily means worrying more about humans than about Earth itself — and, by extension, all the other life that calls this world home. So while Musk and SpaceX are fundamentally looking outward toward Mars, Branson says he hopes the view from low Earth orbit can look inward and find new ways to help our home planet.

It’s also a goal that can’t include everybody — even a settlement of half a million people is nothing compared with a global population of seven billion, and a $200,000 ticket for a one-way Mars flight is beyond what most people could ever hope to afford.

Branson’s focus on tourism in low Earth orbit should make space considerably more accessible, even if the trip will remain plenty pricey. While Virgin Galactic has a lot of work still to do before such flights are ready to begin — Branson last week said Virgin should make it to space within six months, an ambitious target — the emphasis remains on making space open to as many people as possible.

“There are thousands of people who would love the opportunity of becoming astronauts and going into space,” said Branson. “Virgin Galactic is the only company that has built a spaceship with wheels that can come back and land again and take people up and enable them to become astronauts.”

If you liked this article, check out this video on the nerdy way Elon Musk comes up with the names for his inventions.

More like this
Entertainment
8.5.2022 12:30 PM
For All Mankind Season 3’s space mogul is better than Elon Musk — here's why
By Ryan Britt
Innovation
8.13.2022 3:00 PM
Mars City: 3 Red Planet resources could forge a critical building material
By CAROLYN COLLINS PETERSEN and Universe Today
Innovation
8.8.2022 10:00 AM
A wild new plane-train hybrid could whoosh you to your destination — if it can get off the ground
By Molly Glick
Related Tags
Share: