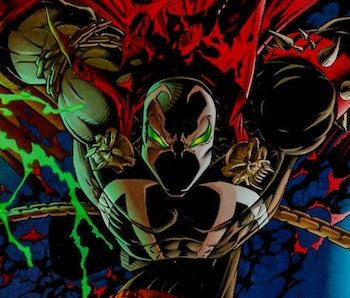 The upcoming Spawn reboot, though low-budget, has a lot of things going for it. It has a horror focus, Blumhouse, a production company with a great track record, is behind it, and Spawn’s original creator Todd McFarlane is in the director’s chair. But, the best sign that Spawn will be a good movie is this: It isn’t going to be an origin story.

Sure, there have been some good ones (lookin’ at you, Iron Man and Batman Begins), but in the superhero-saturated cinema landscape, origin stories are rote. They all tend to hit the same beats that audiences have long-since grown bored of, and the three-act structure prevents the movie from truly taking off until pretty late in the game. That’s not going to be the case with Spawn, according to a Monday interview with McFarlane on Yahoo.

McFarlane flatly stated that his Spawn film wasn’t an origin story, before likening the upcoming picture to Jaws, a comparison he’s made several times in past interviews.

“I always come back to Jaws — not that I have a shark in Spawn! But that shark was enormous,” McFarlane explained. “And at any time in the movie, did they tell me why the shark was so damn big? No! Did it matter to me? No! All that mattered was that it was big and in the same vicinity as humans. Or John Carpenter‘s The Thing: where do the aliens come from? I don’t know! What was its reason for taking over bodies? I don’t know! It just was.”

“I’m OK without an origin,” he continued. “Just give me a compelling story, scare the shit out of me from time to time, and I’m along for the ride.”

Spawn won’t retell the character’s origin, meaning we probably won’t see Al Simmons die, go to hell, and make a dark, crime-fighting deal with the devil. But, it’s unclear if anything we will see, aside from some familiar characters, will be familiar. In that same interview, McFarlane explained the film wouldn’t be based on any existing story arc, and would instead be all-new.

“I can’t do the same story over and over. I wrote it, and I’m bored with it! I want to give the audience something a little bit fresh,” he told Yahoo. “Bring it into a hipster world and make it relevant.”

The Spawn reboot doesn’t have a release date yet.