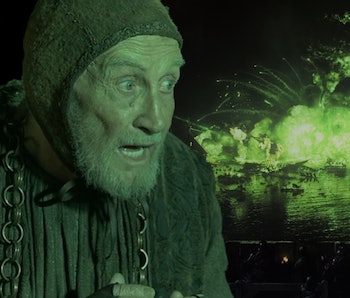 Fans of HBO’s Game of Thrones might recognize Roy Dotrice as Hallyne, the somewhat kooky pyromancer who supplied the wildfire needed to win the Battle of Blackwater Bay, but anyone who listened to the audiobook for A Game of Thrones might recognize Dotrice as every single character. Dotrice, an accomplished actor who died on Monday, holds a special place in the World of Westeros — and a spot in the Guinness Book of World Records.

Dotrice, who is perhaps best-known for playing Leopold Mozart in the 1984 movie Amadeus, was 94 years old when he died at his London home, a statement from his family explains. Prior to becoming a Tony award-winning actor, Dotrice served in the Royal Air Force in World War II and spent years in a German POW camp after his plane was shot down.

Dotrice first came to Westeros when he became the narrator for audiobook versions of George R. R. Martin’s A Song of Ice and Fire. Beginning with A Game of Thrones, Guinness awarded him the world record for providing the “most character voices for an audiobook” in 2004, as over the course of the 33-hour book he voiced 224 distinct characters.

There are reports that Dotrice was originally supposed to play Maester Pycelle in the HBO series, but was prevented from taking the role due to health reasons. He still appeared in a smaller role, though, and Hallyne the Pyromancer made quite an impression when he popped up in Season 2. Here’s that appearance below.

And here’s a sample of Dotrice’s voice work narrating A Game of Thrones.

Dotrice is survived by his three daughters, grandchildren, and a great-grandson.