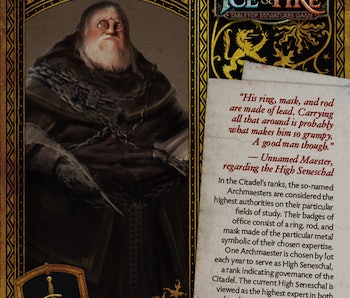 Nobody knows Westeros and the world of Game of Thrones better than its creator, George R. R. Martin. So, it’s only fitting that the author has made his way to the Seven Kingdoms as the High Seneschal, the most learned of all Maesters at the Citadel, in a Kickstarter for A Song of Ice and Fire tabletop game.

A Song of Ice & Fire: Tabletop Miniatures Game, is being made under Martin’s direct supervision, and promises to allow fans of Warhammer and other tabletop games the opportunity to pit Westeros’s great houses against one another on the field of battle. Some popular Thrones characters, like Tyrion Lannister and Sansa Stark, make appearances as miniatures and their characters have special skills. The High Seneschal, whose likeness is explicitly modeled on Martin, appears as a special figure only available to Kickstarter backers (the project has more than doubled its goal already).

Even in terms of gameplay, the High Seneschal is a winking nod to Martin, and the idea of “history” as expressed in A Song of Ice and Fire and Game of Thrones. It allows the winner of a game to decide, retroactively, how exactly everything went down. Victors write the history books, after all.

“Look at the mini-me @CMONGames included exclusively as The High Seneschal in their Kickstarter,” a clearly tickled Martin wrote on Twitter. “Pretty neat… :D.”