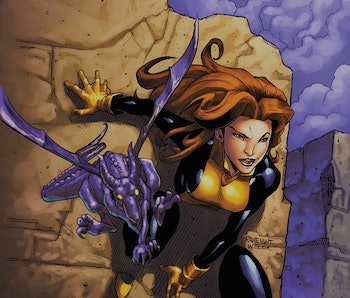 Between the deluge of new characters and the creepy events in the New Mutants trailer, there was a cool cameo you might have missed.

The trailer, which was released on October 13, features the dragon Lockheed, frequent partner to Kitty Pryde (Shadowcat of the X-Men). He shows up as the stuffed toy of a child who’s presumably a young Illyana Rasputin/Magik, which would make sense as the dragon sometimes teams up with her and accompanies the New Mutants on their adventures.

In the comics, Kitty meets Lockheed after the X-Men are kidnapped by an alien race called the Brood and taken into outer space. Lockheed then saves her and chooses to follow her to Earth, where he takes up residence in the X-Mansion and becomes her companion. Partly because Illyana was Kitty’s roommate, the alien dragon also developed a bond with her, though it wasn’t as strong as his one with Kitty.

With all the crazy stuff going on in the first New Mutants film, it seems unlikely that the movie will want to throw an alien dragon into the mix. But as Blu Hunt’s Mirage has the ability to create illusions of a person’s fears or desires, and Magik (played by Anya Taylor-Joy) is a sorcerer — at least in the comics — Lockheed could very well factor into the movie in a larger capacity than stuffed toy, or appear in the flesh in sequels. Even if he’s limited to being a toy, though, it’s nice to see the film demonstrating a wider awareness of the X-Men/New Mutants comic book history.

If you liked this article, check out this video on the five different kinds of Wolverine insults.