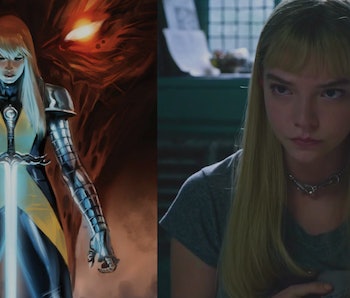 The New Mutants trailer dropped early on Friday morning, offering a glimpse at what a horror movie set in the X-Men universe actually looks like. The idea of mutants being dangerous was on display, as usual, but the young mutants we see in the trailer don’t seem to be the most dangerous thing in the asylum they’re in. We either see them being questioned, being freaked out, or being freaked out and running away. And they’re not using their powers left and right, or at all.

It’s an interesting approach to a film featuring mutants, with characters who aren’t nearly as famous as X-Men like Wolverine, Jean Grey, or Mystique. Since you might not recognize everyone, here’s a handy dive into who the young characters of The New Mutants are, detailing part of their histories, their skills, and their mutant powers, some of which will likely be ignored or adapted for the film.

Abilities: Danielle Moonstar is a telepath who can create illusions of someone’s fears or desires. She’s also a skilled archer, equestrian, hand-to-hand combatant, and swimmer.

Background: Dani is a Cheyenne mutant who hails from Boulder, Colorado. One of her earliest telepathic visions was of her parents being killed by the Demon Bear, shortly after which her parents went missing and she started to live with her grandfather. When she joined the New Mutants, she started having nightmares about the Demon Bear, resulting in a confrontation with the beast. The film will draw on “The Demon Bear Saga” by Bill Sienkiewicz and Chris Claremont.

Background: Born in Rio de Janeiro, Bobby is a Brazilian mutant who previously appeared on the silver screen in X-Men: Days of Future Past (played by Adan Canto). As a teenager, he was targeted by an anti-mutant faction led by Donald Pierce (who was played by Boyd Holbrook in Logan), and pursues him with the help of several other mutants, including Mirage (when she went by the codename Psyche). Following this, they’re all given the opportunity to train under Professor X, resulting in the formation of the New Mutants.

Abilities: Magik is able to create teleportation discs to travel. In her years spent in the paranormal dimension Limbo, she became a sorceress and a skilled hand-to-hand fighter and swordswoman.

Background: Illyanna Rasputin is the younger sister of the Russian mutant Colossus, who most recently appeared in 2016’s Deadpool. When she was six years old, Illyanna was abducted by the villain Arcade as part of a plot to coerce the X-Men to fight Doctor Doom. She was rescued and brought to the X-Men, only to be later taken to Limbo, where she endured hardship and was trained to fight and to perform magic. When she returned to Earth, she was a decade older, but no time had passed since she left. Illyanna then joined the New Mutants.

Abilities: Sam Guthrie’s body generates a thermo-chemical energy which he can use to “shoot” himself through the air. He also has the ability to create protective blast fields.

Background: Cannonball was born in Kentucky, and manifested his mutant ability to save himself and a fellow worker from a collapsing coal mine. He started off as a mercenary for the Hellfire Club, and when the club was employed by Donald Pierce, he was told to kill several mutants, including Sunspot and Mirage. Sam rebelled, and was then offered the chance to train under Professor X.

Abilties: Wolfsbane can transform completely into a wolf, or morph into a transitional state which combines human and wolf traits. These transformations give her enhanced senses, strength, agility, and reflexes.

Background: Rahne (pronounced “Rain”) Sinclair is a Scottish mutant who was raised by an abusive pastor, who tried to burn her at the stake when he learned she was a mutant. She was later rescued and adopted by Moira MacTaggert, and recruited by Professor X after she, Sunspot, Mirage, and another mutant had their run-in with Donald Pierce and Cannonball.