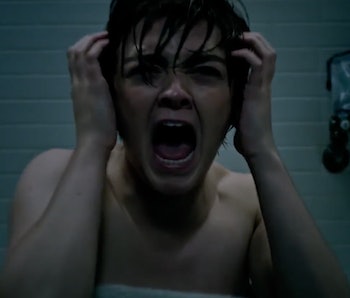 The first trailer for Josh Boone’s X-Men spin-off has arrived. The New Mutants, the preview of which aptly arrived on Friday the 13th, looks set to take the series in a dark and mysterious direction.

Game of Thrones’ Maisie Williams stars as Scottish mutant Wolfsbane. She’s joined by Charlie Heaton, Anya Taylor-Joy, Henry Zaga, and Blu Hunt. Alice Braga plays Cecilia Reyes, who acts as a mentor to the group as the adolescent mutants come to grips with their powers in a secret facility.

The trailer features the group facing the horrors of the facility as a haunting rendition of Pink Floyd’s “Another Brick in the Wall” plays in the background, complete with a children’s choir chanting to “leave those kids alone.” So far, reaction has been one of surprise at the franchise’s new direction.

“Boone’s definitely going for something different,” said Reddit user coltrane233. “Doesn’t look like an X-Men movie at all.”

“Love that they’re taking risks,” TV writer Amy West said on Twitter. “Just look at Logan, it pays off! There are so many different kinds of mutants & X-Men - let’s explore it!”

Boone, who previously directed The Fault in Our Stars, has been upfront about his wishes to take the series in a new direction.

“We are making a full-fledged horror movie set within the X-Men universe,” Boone said in a May interview. “There are no costumes. There are no supervillains. We’re trying to do something very, very different.”

If you liked this article, check out this video which remembers Stu, the dumbest guy in the X-Men universe.