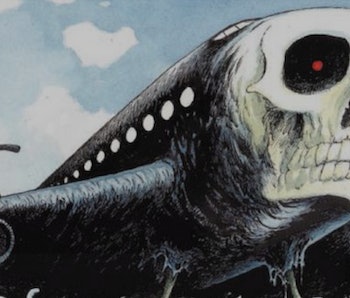 Passengers from Copenhagen took a plane to HEL this week — Helsinki that is. Finnair flew passengers from the Danish capital to Finland on flight 666, the last time the airline will use the flight number. Most terrifying of all, it coincided with Friday the 13, considered by many in Western culture as the unluckiest date on the calendar.

But passengers need no longer fear boarding a Friday the 13th ride that includes the number of the beast. Finnair is retiring the flight number. Starting on October 29, the flight number will change to AY954. “Today will actually be the final time that our AY666 flight flies to HEL,” a spokesperson for the airline told The Telegraph.

Although it seems like a risk many wouldn’t try and take, the airline has flown that flight number — along the same route — on Friday the 13th since 2006. Over 11 years, it’s actually happened 21 times.

The final passengers left Copenhagen at 1:20 p.m. Central Europe standard time and landed in Helsinki at 3:55 p.m. Eastern Europe Summer time, with the flight lasting one hour and 19 minutes.

Even the path of AY666 traversed above some spooky waters. After flying over southern Sweden, the plane crossed the historic Baltic sea. The sea is home to the legend of the Klabautermann, which would appear to fishermen on doomed ships, as well as being home to the Mars shipwreck that went up in flames in 1564:

But the flight itself has become something of a novelty for its merging of several superstitions.

“It has been quite a joke among the pilots,” pilot Juha-Pekka Keidasto previously told the publication. “I’m not a superstitious man. It’s only a coincidence for me. If there’s some passenger who is anxious about this 666, our cabin crew is always happy to help them.”

Unfortunately, those looking to avoid any bad luck may be less pleased to learn that there’s plenty more Friday the 13ths where that came from. It’s one of the most common days on the calendar.

If you liked this article, check out this video of a detachable airplane cabin for in-flight emergencies.

More like this
Culture
Sep. 23, 2022
You need to watch the best legal thriller of the century before it leaves HBO Max next week
By David Grossman
Science
20 hours ago
65 years ago, “simple satellite” Sputnik redefined space science — and sent a sinister message
By Allie Hutchison
Science
12 hours ago
Watch: Stunning visualizations reveal the Moon's violent birth
By Jennifer Walter
Related Tags
Share: