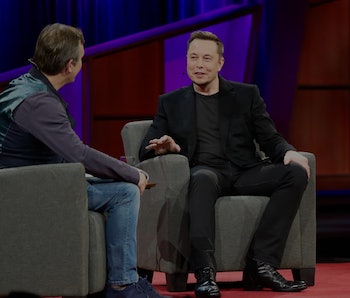 Elon Musk has given a helping had of sorts to the startups developing his hyperloop idea toward achieving the goal of sending pods through a vacuum-sealed tube at 700 miles per hour.

The man behind the original white paper for hyperloop’s design responded on Twitter Wednesday to a query about how best to propel pods using an air bearing suspension system. The nugget of info could help teams reach the theoretical maximum speed and enable trips from Los Angeles to San Francisco in 30 minutes. And it’s all about more gas.

Hyperloop pods tend to use one of three suspension systems: wheels, magnetic levitation, and air bearing suspension. WARR Hyperloop from Germany, which achieved a speed of 201 mph back in August, used wheels for its record-breaking pod, but they suffer from friction that could cause slowdown. Magnetic levitation is used on a select few train tracks, and Hyperloop One uses it with its test track to reach 192 mph, but it’s incredibly expensive. Air bearings, which uses a thin film of pressurized air, could save money and reduce friction.

“Air bearings offer stability and extremely low drag at a feasible cost by exploiting the ambient atmosphere in the tube,” Musk said in his 2013 paper. “Externally pressurized and aerodynamic air bearings are well suited for the Hyperloop due to exceptionally high stiffness, which is required to maintain stability at high speeds.”

So what does Musk propose to help this gas-based suspension system reach high speeds? More gas.

Ever since Musk released his idea, third party teams have been working hard to reach those theoretical maximum speeds. Hyperloop One, one of the more prominent hyperloop firms, has built a 0.3-mile “DevLoop” test track in the Nevada desert. In tests back in August, the team managed to get its magnetically levitating pod to reach speeds of 192 mph, and it believes that it could easily reach the top 700 mph speed.

Musk’s space exploration company SpaceX has held two competitions on its 0.8-mile test track, aimed at getting college teams and others to focus on pod design rather than building a full-scale test track. In the second event, WARR Hyperloop made its record-breaking run.

The race to reach full speed is on, and any advancements that save on cost while improving speed could prove welcome. But while air bearings could serve as a good way of reaching even higher speeds, Musk’s paper does not propose ditching the trusty wheel altogether. At speeds of under 100 mph, landing gear wheels similar to those found on airplanes could deploy and allow for easier maneuvering. Some technologies never go out of fashion.

If you liked this article, check out this video about the Hyperloop One prototype tripling its original top speed.

More like this
Innovation
21 hours ago
Are self-driving cars safe? The tipping point rests on a psychological illusion
By Jean-François Bonnefon and The Reader
Innovation
7.1.2022 10:00 AM
Robots are ready to get touchy-feely
By Sarah Wells
Innovation
6.29.2022 6:00 PM
Can cars run on water? The science of a TikTok conspiracy theory, explained
By Andrew Moseman
Related Tags
Share: