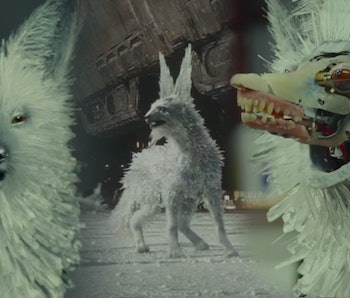 Everybody freaked out about the Porg in the new Star Wars: The Last Jedi trailer that premiered on Monday night, but the lil’ guy wasn’t the only animal from a far away galaxy to appear in the spot. There was also a glimpse of a fox-like creature whose fur was made out of crystals or ice. The trailer, though, wasn’t actually the first look Star Wars fans have gotten of the as-yet-unnamed creature, and the previous glimpses were actually pretty weird.

The animal, which we’ll just call a “crystal fox,” for now, lives on the planet Crait, a new addition to the Star Wars universe as of The Last Jedi. It only appears in a really, really short clip in the new trailer, where it’s seen stopping to look behind it as the rest of its pack run towards a Resistance base.

It’s the first time we’ve seen the animal in action, but the Last Jedi behind-the-scenes video that Disney released at D23 in July shows both concept art and an animatronic of the crystal fox. Neither are as endearing as the real deal we see in the trailer.

In this rendering, the fox looks unsettlingly wise and borderline high. It appears to be an earlier version of the animal, as the ears and head-shape are different. This guy’s nose is more pointed and fox-like, while the animal seen in the trailer has a more broad snout and an almost resembles a lynx.

I shouldn’t need to explain why this robot crystal fox with a flayed head is a nightmare, but its teeth look like they could easily rip a Porg to shreds. Just sayin’.

Chances are any crystal foxes in the final release of The Last Jedi won’t have bare skulls, but we’ll have to wait until the film hits theaters on December 15 to know for sure.