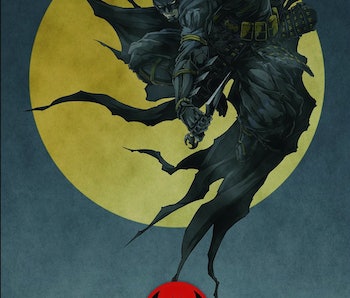 Based on the film’s title, many expected the upcoming Batman Ninja anime to either feature the Dark Knight as a ninja in modern day Japan, or him as a ninja during feudal Japan. But, the film will actually see Batman time-travel (and teleport?) to Japan’s Warring States period from present-day Gotham.

At New York Comic-Con’s Batman Ninja panel on October 5, the creators behind the film revealed that time-travel would factor into the story. Via translator Mari Morimoto, director Jumpei Mizusaki said that “Batman actually time-travels from twenty-first century Gotham to the Middle Ages of Japan. And all the villains also actually time-travel, so they have an epic battle in the era of warring states in Japan.”

The villains Mizusaki referred to include the Joker, Harley Quinn, Gorilla Grodd, the Penguin, Two-Face, and Catwoman. But members of the Batfamily, like Robin and Nightwing, are also coming along for the ride.

One of the English language screenwriters, Leo Chu, later commented on how time-travel plays into the film’s story. Responding to a question about working with Takashi Okazaki on Afro Samurai, Chu said: “[Okazaki] has this great thing that he did in Afro Samurai which blends sort of feudal and traditional Japanese things with technology and modern technology. And in this time-travel story, that really helped inform our adaptation, so it really becomes about the natural world and traditional world versus the high-tech world, and what that means for each of the characters from Batman’s world of villains.”

The trailer which was exclusively screened at the convention touched on these themes a bit, showing off the tank-like Batmobile going around feudal Japan, along with at least one Bat-cycle.

However, Chu emphasized earlier in the panel that the English language version of the film was a true adaptation, and less of a literal translation of the Japanese script. So these themes could be more or less prominent depending on which version of the film you watch.

The decision to use a present-day Batman, instead of a Batman who grew up in the warring states period, is an interesting one, but it raises a lot of questions: How does everyone time-travel to the past? How exactly do all of the characters get their new, samurai-inspired outfits? And do they all magically learn Japanese, or does the language barrier factor into the film? Naturally, the panelists were mostly tight-lipped on plot details, so we’ll probably have to wait until 2018 to find out more.

Batman Ninja will come out sometime in 2018.

Bruce Wayne revealed a new reason for why he became Batman. Check out this video to find out more.