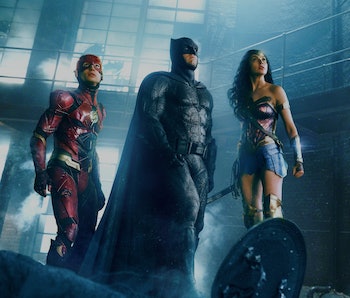 In anticipation of Justice League’s release next month, fans will be getting another, likely substantial look at the film this weekend.

On Wednesday, the official Justice League Twitter account announced — in a series of tweets with new posters for every Leaguer except Superman — that a new trailer for Justice League would be coming on Sunday, October 8.

Between the meaning of “unite the seven” and the exact means of Superman’s return from the “dead,” there’s still a lot we don’t know about Justice League. If it features a bunch of new footage, the trailer could start to shed light on these questions, while hopefully keeping enough obscured for when the film’s actually out in theaters.

The last time we got a trailer for Justice League was in July at San Diego Comic-Con, but with August’s news that Joss Whedon had contributed enough to the film to warrant a writing credit, we may see a lot more of Whedon’s touch in the new trailer.

Whether or not any of this is the case, though, with the movie’s release almost upon us, DC fans will probably settle for a trailer that doesn’t look worse than what’s been released so far.

Justice League will hit US theaters on November 17.