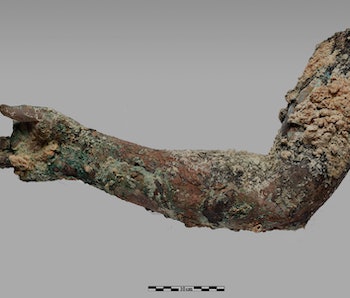 The site of a famous shipwreck dating back over 2,000 years has once again breathed new life into some very old treasure. In a dive last month off the Greek island of Antikythera, researchers recovered a bronze arm that once belonged to a statue dating back to the first century. It’s missing a few fingers, but what it lacks in digits, it makes up for in character.

According to Live Science, divers working with the Hellenic Ministry of Culture and Sports (HMCS) found the arm along with many other artifacts, including fragments of a bronze statue and wooden ship pieces. It’s a pretty big site, spanning roughly 164 square feet (50 square meters) at depths of 131 to 184 feet (40 m to 56 m) under the sea.

This most recent dive revealed a plethora of ancient, presumably barnacled treasures besides the arm, and researchers are eager to start studying them.

“We investigated further, test trenched [dug trenches at the site without excavating further], metal detected and began to find extremely interesting finds, including wooden-hull remains, large bronze nails and spikes from the hull, and then the bronze sculpture elements,” researcher Brendan Foley told Live Science in an email.

The Antikythera shipwreck site, first discovered in 1900, includes the remains of a ship that once carried luxury items. Gems, glass, and even ancient skeletons have all been found at the location. Most notably, in 1901, divers found fragments of a device now known as the Antikythera Mechanism, which has been credited as the first computer. According to Smithsonian, 82 pieces of the mechanism — which was used to track celestial events — have been recovered to date.

While this new arm isn’t the flashiest find, it’s a useful one nonetheless. According to Live Science, few bronze sculptures from antiquity — especially ones that have aged underwater — remain this intact after thousands of years. This arm could “provide critical historical context for [other] artifacts,” the outlet reports.

There’s still a lot of work to be done at Antikythera shipwreck site, so here’s to hoping for an undersea city or at the very least, some more computers from antiquity.