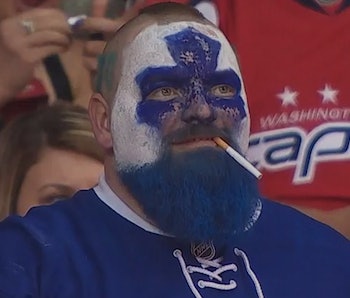 The National Hockey League’s 101st season began Wednesday as the defending Stanley Cup champions, the Pittsburgh Penguins, took on the St. Louis Blues and lost — a spicy start to a much-hyped year. The excitement building over the season is welcome news for networks and advertisers, but a team of doctors warned in a new study that it might spell bad news for the health of devoted fans. Watching hockey, they report, is extremely stressful for the heart.

And because they’re Canadian scientists reporting on data from fans of the Montreal Canadiens in the Canadian Journal of Cardiology, there’s good reason to believe them.

“Our results indicate that viewing a hockey game can likewise be the source of an intense emotional stress, as manifested by marked increases in heart rate,” said senior investigator Paul Khairy, Ph.D. of the University of Montreal’s Heart Institute in a statement.

This may not come as a surprise to anyone who’s ever freaked out while watching their team play a game — of any sport — but as it happens, scientists have never measured the effects of hockey, specifically, on the heart rate of spectators. It’s a good thing the University of Montreal researchers did, as they didn’t just pinpoint the risks of “watching exciting games” but also the parts of those games that are most likely to lead to unusual heart problems.

To do this, they strapped Holter monitors — camera-sized devices that measure heart activity — to 20 Canadiens fans watching either live or televised games. Before watching, those fans had all filled out a questionnaire to determine their “fan passion score” — a measure of how invested they were in the team.

Analyzing the data revealed some bad news for NHL season ticket holders. While the heart rates of people who watched televised games increased by an average of 75 percent, those who watched live games felt an increase of 110 percent — which the researchers say is is equivalent to the cardiac stress involved with vigorous exercise.

As the scientists matched up each fan’s shifting heart rate with the events of the game, they found that some parts of the game were unexpectedly stressful. While it would make sense that the final minutes of a hockey game would trigger the highest spike in heart rate, it turns out that any scoring opportunity — whether for or against — was a potentially heart-stressing moment. Same went for pretty much anything that happened during overtime. (The passion score, surprisingly, wasn’t linked to changes in heart rate, suggesting that die-hard and bandwagon fans are equally susceptible to a game’s exciting moments.)

Sudden increases in heart rate are not flat-out dangerous, but they can trigger more serious cardiac events, like heart attacks, in people who are already at risk. In an editorial accompanying the study, two doctors who were not involved with the research pointed out that, while “ardent” hockey fans come in all shapes, sizes, and degrees of health, the archetypal Canadian hockey fan is in no shape to be experiencing sudden spikes in heart rate:

For example, “Dart Guy,” the Toronto Maple Leaf super fan who shot to Twitter stardom during the 2016 playoffs, is addicted to cigarettes and looks rather overweight. One could speculate that he might also have some combination of hypertension, prediabetes, hypertriglyceridemia, and low high-density lipoprotein cholesterol.

People with these characteristics should definitely ask their doctor for a cardiovascular risk assessment, they write. Ultimately, it’s on a person’s doctor to make decisions about whether or not they should cut down on watching hockey games, but it’s not a bad idea for people to recognize when they should make a visit to the clinic in the first place.

In a statement, Khairy explained that it’s “not the outcome of the game that primarily determines the intensity of the emotional stress response, but rather the excitement experienced with viewing high-stakes or high-intensity portions of the game.”

He didn’t go so far as to recommend taking any particular actions to prevent that stress, as the study was too small to suggest that watching hockey might cause population-level heart problems (and, the proud Montrealers pointed out in their paper, the level of emotional attachment that Canadiens fans exhibit may not be generalizable to all teams).

The researchers, of course, are not suggesting that anyone stop watching hockey — they are Canadian after all, and to do so would be anathema. Simply being aware of when you could get overexcited, however, could prevent much more serious issues.

For better or for worse, as the authors of the editorial point out, Canadian hockey fans, at least, are not likely to be exposed to any cardiovascular-stressing “frenzied celebrations” anytime soon.

“Unfortunately, that risk does not seem imminent. In fact, no Canadian-based team has won the Stanley Cup since 1993.”