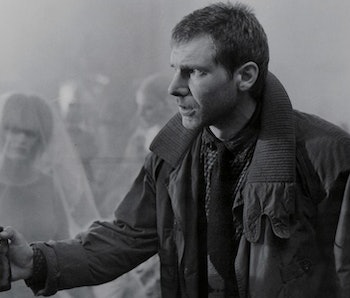 To love Blade Runner is to love not having satisfactory answers to your basic questions about the plot. Imagine a version of the Star Wars trilogy in which it’s vaguely suggested that Darth Vader is Luke Skywalker’s father, but no one really outright confirms or denies it. Instead, Yoda makes a paper mache Darth Vader hand puppet and tells Luke a weird riddle. This is what Blade Runner debates are like. We’ve got some evidence to support our claims, but because everything is so insane to begin with, it might not be smart to use regular logic to figure this stuff out.

With that in mind, there are still a few pervasive myths that are passed-off as facts in relation to Blade Runner. As with all things connected to this seminal sci-fi masterpiece, the following four topics will probably never stop being argued. Still, it might be nice for fans to get over these topics before heading into the sequel, Blade Runner 2049. As you’ll see, getting your robot-settings back to baseline has its advantages.

Spoilers for the original Blade Runner ahead. Zero spoilers for Blader Runner 2049.

4. Blade Runner is True to Its Source Material

The word “replicant” and the slur “skin-job” appear nowhere in Philip K. Dick’s novel Do Androids Dream of Electric Sheep? The title Blade Runner does not originate with Dick’s book either. Original screenwriter Hampton Fancher lifted it from a William F. Burroughs novel bizarrely called Blade Runner: A Movie. So, the most famous sci-fi words associated with Blade Runner all come from the film, not the book.

Yes, Dick’s novel features a bounty hunter named Rick Deckard, escaped androids named Roy Batty and Pris, plus the femme fatale Rachael, but the similarities pretty much end there. Plus, the screenwriter who did the biggest rewrites on the movie — David Peoples — was encouraged by director Ridley Scott and others not to read Do Androids Dream of Electric Sheep? Did Philip K. Dick like the movie? Before he saw it, he hated everything about the process in making it. But, just before his death, Dick was given a private screening of the film and said “ Those are not the exact images, but the texture and tone of the images I saw in my head when I was writing the original book! The environment is exactly how I’d imagined it!” So, fittingly, Blade Runner is pretty different from the book upon which it was based, but the author found that this cinematic replicant had empathy towards his original creation.

If you’re deeply ensconced in the lore of both Blade Runner and the works of Philip K. Dick, then you’re probably aware of something very important: this shit doesn’t really make sense. But that’s not the point, nor does logic or consistency explain why the film is so awesome. Blade Runner is good because it’s a triumph of style and mood over pretty much everything else. While some fans of Blade Runner believe the film achieved realistic science fiction world-building, that’s hardly true. It only felt realistic because the Ridley Scott sci-fi grittiness of Alien happened to fit the vibe of Dick’s moodiness perfectly.

But, from a basic common-sense perspective, almost nothing about Replicant detection makes much sense. (A fact which is oddly corrected by the new film, Blade Runner 2049) In the original Blade Runner and the Philip K. Dick novel, a complex psychological questioning test is necessary to figure out if someone was a Replicant. But, because of the cells of Replicants break-down after four years, it seems like it would be pretty easy to just take a skin sample and notice huge differences there. Also, in the film, Deckard is able to find a serial number on an ersatz snake by analyzing just one scale. Would Replicants not have similar microscopic markings? Science fiction writer Stanislaw Lem elucidates the logical fallacies inherent in this concept in his non-fiction book Mircorworlds. “We hear that it is impossible to distinguish between humans and androids with one hundred percent accuracy. To do this one needs a psychological test that measures the suspects’ reactions with a psychogalvanic apparatus. The test is nonsense….it is child’s play to discover the difference by means of an organic examination of a microscope slide preparation of cell tissue, a procedure that takes about three minutes.” To be clear, the Solaris author loved Philip K. Dick. He just didn’t think the strength of his books was connected to their convincing realism.

2. The Voiceover Was Terrible and Ruined Everything

This is a big one. Certain fans of this cult 1982 science fiction film will tell you that the theatrical version released in 1982 is garbage because it contains a heavy-handed noir voiceover recorded by Harrison Ford at the behest of the studio. Only the subsequent Director’s Cut and Final Cut have allowed Ridley Scott’s true vision to be realized. Right? Wrong.

The problem with this thinking is that ignores two truths. First, that for over a decade science fiction fans fucking loved the original Blade Runner, and were unaware that this supposedly wretched voiceover was something they were supposed to hate. Second, the voiceover was originally Ridley Scott’s idea. The thing he and Ford hated about the one in the theatrical release was that the voiceover used in it was the third version recorded and the one mandated by the studio. So, the concept of the voiceover isn’t what they hated, it was the specific voiceover used. This truth is easy to verify, though it seems like Scott and Ford don’t mention it at all now.

In Blade Runner: The Final Cut, the notion of Deckard being a Replicant is seemingly made clear. He dreams about a unicorn, and then Gaff puts a tinfoil unicorn in his apartment at the end. How could Gaff know about the unicorn unless Deckard is a Replicant? Too much of a coincidence, right? Well, maybe not. Though Ridley Scott has adamantly claimed that he made it clear that Deckard is a Replicant, others, like Harrison Ford, disagree. The truth is even in The Final Cut, a casual viewer could decide the tinfoil unicorn means nothing.

Put it another way: if Gaff knows the unicorn dream is something Replicants often are programmed to dream about, then who is to say he the tinfoil unicorn wasn’t intended to reference Rachael? Sure, because Deckard dreams about a unicorn, that means he’s a Replicant. But, Deckard says in the film that Rachael’s memories are probably based on Tyrell’s niece. Some fake memories and dreams are woven out of real ones. And as audiences will find in Blade Runner 2049, the line between real dreams and fake dreams is about to get blurred again. Meaning, unicorns might not be the silver tinfoil bullet many believed them to be.

If you liked this article, check out this video about practical effects in Blade Runner 2049.