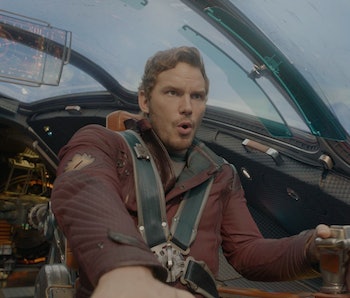 Cocky attitudes won’t be the only barrier when the Guardians of the Galaxy first meet the Avengers in outer space during Avengers: Infinity War, because most of the Guardians don’t know English. So it’s a good thing that they all — with the exception of Groot — have two-way translator chips in their heads to make communication easy.

This article has been updated from its original version to include further details and clarifications provided by James Gunn.

When we watch Guardians of the Galaxy or Vol. 2, we’re actually watching a foreign language film, because director James Gunn confirmed yet again on Tuesday that “none” of the Guardians of the Galaxy speak English in either movie. Marvel wouldn’t dream of having them speak in some alien language, forcing us to read subtitles, because who would want that? So maybe we’re the ones with translator chips in our heads?

This makes perfect sense if you look at the characters. Peter Quill left Earth decades ago at the age of nine, so he probably remembers a thing or two, but as for the rest of them, there’s a raccoon that shouldn’t even be able to speak and a bunch of aliens from a different galaxy, one of whom can only say “I am Groot.”

But this won’t be a problem when Thor slams into their windshield and the Guardians get all cocky towards the start of Avengers: Infinity War.

Gunn himself later confirmed that even though they don’t speak English, language will probably never be a problem for the Guardians:

“None of this is a problem. The translator implants — which all of the Guardians except Groot have — work both ways. That is, if they’re talking with someone who speaks French, they can both understand AND speak French (if French is programmed into the translators). This is a pretty simple technology by Guardians standards — just a more advanced version of Google translate — and certainly something we’re technologically closer to than, say, traveling light years.”

Similar questions about the Guardians’ language arose shortly after the original Guardians of the Galaxy came out. A fan asked why everyone in the movie spoke perfect English, and Gunn noted a small detail from the first movie:

If you remember, the “mug shot scene” Gunn mentions is the distracting and popularized sequence in which Quill cranks up his hand to flip the bird to the Nova Corps.

An overview of Quill’s criminal history and physical characteristic flashes on the screen. But on the bottom is a note that reads: “TRANSLATOR IMPLANT IN NECK.”

James Gunn also mentioned at the beginning of August that Quill possibly doesn’t speak English anymore: “I never said Quill spoke English anymore.” Perhaps he can’t (without the translater, anyway)? After all, he was abducted from Earth around the age of nine, and who knows what several decades of exposure to completely alien language can do to a person.

Either way, as long as those translator chips keep working, the Guardians and Avengers will have no problems communicating. So only one question remains:

Ever wonder how the Guardians travel so dang fast? Check out this video of an expert look at wormhole travel in Guardians of the Galaxy Vol. 2.