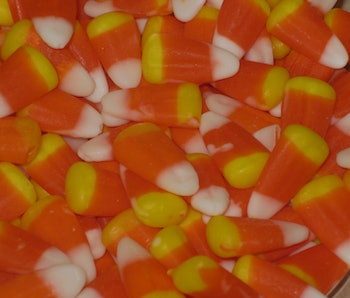 Every October, internet denizens converge to shout into the void — but mostly, at each other — about candy corn. The debate is divided into two warring factions: the fans — or as we at Inverse call them, “Candy Corners” — and those bereft of a happy childhood.

At this point, the ‘net is saturated with candy corn takes for the candy corn god. The common thread among all of them is that the treat evokes a strong sense of nostalgia, which can actually influence a person’s feelings toward food, either positively or negatively. Basically, if a person grew up enjoying the flavor of candy corn — or maybe the setting they ate it in — they’re more likely to indulge in it as an adult.

Some people never acquire this appreciation for such refined things and while it’s not entirely their fault, they don’t deserve our sympathy, either.

We asked food scientists for their input to settle the great candy corn score once and for all. Of course, some of our staff felt compelled to add their own thoughts:

Professor of Food Engineering at the University of Wisconsin-Madison

“Why do people either love it or hate it? Who knows why people do or think a lot of things. I used to eat them, but don’t any more. That’s true of most candies — I ate a lot of candy when I was a kid but control what I eat now to maintain some semblance of a decent weight. Candy corn is one of those candies that isn’t good enough for me to waste calories on.”

“There are many foods that people disagree about liking. I do not feel candy corn is different from many other foods. I am indifferent to it. I do not eat it — it is too sweet.”

“I’d just like to say that I think people who hate on candy corn are just trying to be contrarian. There is no empirical support for their position that it is anything but good. Search PubMed for “candy corn bad” and you’ll find nothing. (I assume, I haven’t actually done that.)”

Nutrition Scientist at the University of Newcastle, Australia

“I’m Australian. We don’t have candy corn, and it’s spring here. Seasonal candies in general encourage people to over-indulge. If it’s for a limited time only, people are more likely to overdo it. Plus the nostalgia factor enhances the experience.”

“Candy corn is bad and when I was about 8, my little cousin decided to pelt me with candy corn a few days after Halloween.”

“I am perhaps alone, but I have no opinion about candy corn.”

“My ultimate take is that Candy Corn is a mediocre piece of candy that is neither good nor bad, it’s just there. It is plain and inoffensive, like Coldplay, mini pretzels, or House Democrats. At least with truly bad things — Peeps, PewDiePie, the GOP — we know true evil.”

Soon, you’ll be able to eat twice as much chocolate. Check out this video to find out more.