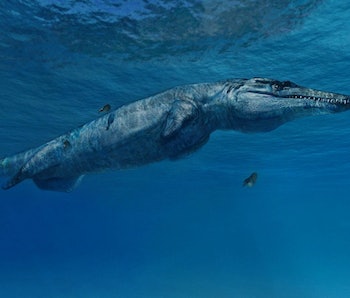 For almost 150 years, a badly damaged reptile skull sat neglected in the archives of London’s Natural History Museum, carrying the story of the Earth’s first reptiles in its ancient grooves. Recently, when paleontologists from the University of Edinburgh gave it a second glance, and they discovered that the long-ignored fossil gave a rare glimpse into a massive, early crocodile — one of history’s first sea monsters.

With the help of careful chiseling by the museum’s “fossil preparators,” the paleontologists uncovered distinctive characteristics in the fossil’s skull, jaws, and teeth, which led them to classify it in the Journal of Systematic Palaeontology on Monday as a completely new species. Ieldraan melkshamensis — which they promptly nicknamed the Melksham Monster, after the English town where it was dug up — was a 10-foot-long proto-crocodile with serrated teeth that regularly chomped into massive prehistoric squid. And it prowled the Earth’s warm, shallow seas much earlier than scientists once assumed.

“The Melksham Monster would have been one of the top predators in the oceans of Jurassic Britain, at the same time that dinosaurs were thundering across the land,” said study co-author Steve Brusatte of the University of Edinburgh’s School of Geosciences in a statement.

There was never any question that modern-day crocodiles had come from a line of giant, extinct, ancient reptiles, but until this discovery, scientists had believed that those early crocodiles, from the sub-family Geosaurini, roamed the earth between 152 and 157 million years ago during the late Jurassic period.

But the Melksham Monster’s serrated teeth, together with curious ornamentation on its lower jaw, made it clear to the paleontologists that it was not like the other ancient crocs they’d seen before — it was an entirely new species that had prowled the seas much earlier, in the middle Jurassic period, 163 million years ago.

Discovering ziphodonty — that is, serrations — on the old croc’s teeth has “major implications for the evolution of macropredation in the group,” the researchers write. The Melksham Monster’s teeth, they explain, was put in a group of four related, serrated-toothed geosaurins that they now know all came from the same common ancestor.

This discovery almost didn’t happen because the fossil, which has been sitting around the museum since 1875, was “completely enclosed in a super-hard rock nodule with veins of calcite running through, which had formed around it during the process of fossilisation,” said Mark Graham, the Natural History Museum’s senior fossil preparator, in a release. Cracking open that rock, says Graham, required diamond-encrusted grinding wheels and chisels tipped with carbon steel.

“This was one tough old croc in life and death!”

This velvet worm ain’t messing around! Check out this video about one of the fiercest predators on Earth.

More like this
Science
Sep. 15, 2022
This tiny reptile roamed with the dinosaurs — and could solve an evolutionary mystery
By Jennifer Walter
Science
Sep. 24, 2022
Is a fact always true? A philosopher explains how to spot the difference
By Peter Vickers and The Conversation
Science
Sep. 23, 2022
Ancient DNA reveals the shocking scale of Anglo-Saxon migration
By Jennifer Walter
Related Tags
Share: