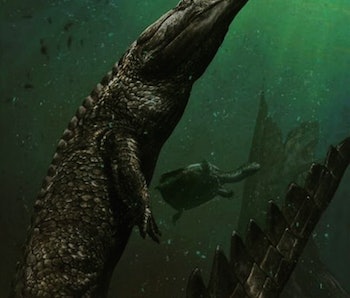 Paleontologists working in Tunisia have discovered evidence of the world’s largest sea-dwelling crocodile, as reported in the journal Cretaceous Research.

Described with a “skull length up to 160 cm (approximately 5.25 feet) and an estimated body length of 10 m (about 33 feet),” the thalattosuchian (ancient marine crocodile group) was characterized to The Washington Post by Federico Fanti of the University of Bologna as “the top of the food chain at the time, at least in this particular locality.”

Found buried only a few inches below sediment close to the edge of the Sahara Desert, the creature dubbed Machimosaurus rex has been deemed a water hunter that could either scavenge or ambush its meals, with a crushing bite force. Its discovery has added significance, as similar crocodylomorphs were believed to have died out by the end of the Jurassic Period—about 145 million years ago—but M. rex only dates back 130 million years, putting it firmly in the Cretaceous Period.

Fanti further explained that previous studies indicated a “big global extinction between the Jurassic and Cretaceous periods that wiped out a number of marine reptiles, including this group of reptiles,” but the discovery of M. rex leads him to “consider the mass extinction theory is wrong and that we should better understand what’s going on at the end of the Jurassic period.”

More like this
Science
Sep. 23, 2022
Three everyday beverages that may taste worse because of climate change
By Tara Yarlagadda
Mind and Body
Oct. 1, 2022
How important is breakfast, really? A health expert explains how to do it right
By Elana Spivack
Science
2 hours ago
How the Moon formed and more: Understand the world through 8 images
By Robin Bea
Related Tags
Share: