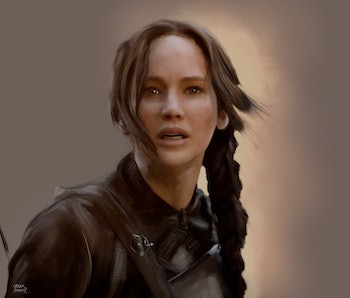 The new trailer for Hunger Games: Mockingjay Part 2 just firebombed the Internet, prompting Katniss fans to scream with revolutionary zeal. The Capital must be toppled. And that seems like what’s probably going to happen. Hell, that’s what happened when George Lucas made almost exactly the same movie and called it Star Wars.

Here’s proof that the two films are actually one and the same.

The protagonists fight against an evil lord that purrs threats and consolidates power through a bunch of arcane alliances related to the trade of raw materials. Donald Sutherland would have rocked the Emperor Palpatine role if he wasn’t so damn young and handsome when A New Hope debuted.

When Brienne of Tarth joined the Force Awakens cast, the sort of people who go crazy about stuff like that went totally crazy. From the looks of it, Christie is now going to be a helpmeet for Ms. Everdeen. She belongs in both universes because they look and feel the exact same (dudes in brownish rags versus fancy people).

George Lucas loved to zoom out on a big crowd. He spent the three prequels zooming back and back and back to the point that no one could even see the plot anymore. If the trailer is any indication, we can expect the same approach from the filmmakers behind Mockingjay Part Deux. Also, the buildings in the capital look very Reichstagey given the prevailing over-the-top aesthetic in the Capital.

No, Han and Luke weren’t technically married at the end of Star Wars, but that’s exactly what looked like was happening — and it was weird until Chewbacca broke the tension with a roar. In the latest Mockingjay, Finnick marries a red-headed person and people dance around in a bunker in a very off-putting Children of the Corn-type way. Neither franchise knows how to handle happy. They’re both at their best when they’re violent and quippy.

All that said, it’s not such a bad thing that movies are so similar. They’re similar, presumably, because the uprising plot driven by a compelling single protagonist schtick works. Why mess with the formula? After all, two Star Wars is better than one.