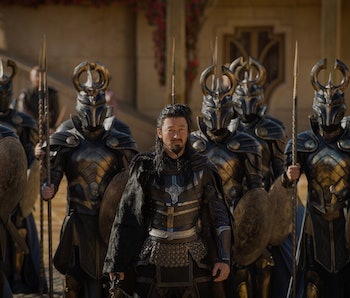 With Thor: Ragnarok’s release hammering down on us, we now know that the mighty God of Thunder will be joined by some old friends. Actor Tadanobu Asano, who has played the character Hogun since 2011’s Thor, has finally been confirmed to reprise his role in Ragnarok this November.

On the Japanese entertainment blog Spice, a new image of Thor: Ragnarok reveals Asano in Hogun attire standing in front of an Asgardian battalion. This is the very first image of Hogun, or for that matter anyone from the Warrior’s Three, from the new movie. Until recently, it was unknown if any of Thor’s old friends would return, with the possible exception of Lady Sif (Jamie Alexander).

With Lady Sif and now Hogun accounted for, the only characters left to be confirmed are Fandral (Zachary Levi) and Volstagg (Ray Stevenson). For what it’s worth, during production Stevenson was spotted at a tattoo parlor in Melbourne, not far from where Thor: Ragnarok was filmed. Meanwhile, Levi — who took over the role from Josh Dallas (Once Upon a Time) in 2013’s Thor: The Dark World — has been absent entirely.

In a conversation with CinemaBlend earlier this year, producer Brad Winderbaum slyly confirmed that Thor: Ragnarok will reveal the whereabouts of the Warriors Three and Sif, regardless if they appear or not.

See the new image of Thor: Ragnarok below.