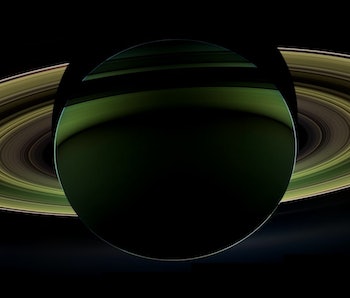 While Saturn might not be as thicc as its celestial neighbor Jupiter, the gas giant remains a cornucopia of unsolved mystery. We still don’t know how old its famous rings are, or how long a day on the planet actually is. But perhaps the most often-overlooked Saturnian mystery is that it has been secretly harboring “kittens” in its F Ring, according to data from NASA’s Cassini.

Of course, these features aren’t actually baby cats — if they were, I would have jetted out of here long ago. These 60-some odd “kittens” are actually baby moons — or moonlets — which form after particles within the ring collide and clump together. These kittens — which were first spotted by researchers from NASA’s Cassini spacecraft back in 2007 — influence the shape of the F ring so that it’s constantly changing its structure.

For some reason, Saturn’s kittens remained under the radar for many years. A spokesperson from NASA tells Inverse that the kittens are suddenly back in the public consciousness after a reporter asked about naming Saturnian features after pets during a post-mission briefing on Sept. 15. According to NASA, the baby moons were named kittens — and even given individual cat names like “Mittens” and “fluffy” — because “they appear to come and go unexpectedly over time and have multiple lives.” Apparently, some dog people weren’t happy about the name change, but were ultimately overruled.

“This was an appropriate nomenclature for temporary features, and I favor using feline names in other applicable situations,” Larry Esposito, principal investigator of the Ultraviolet Imaging Spectrograph (UVIS) experiment on the Cassini, tells Inverse. Esposito — who is credited with discovering Saturn’s F Ring back in 1979 — was chiefly in charge of naming the kittens.

“These ‘kittens’ show us clumps now forming in Saturn’s F ring, a disk of material like the original protoplanetary disk around our Sun, like when the Earth and the other planets formed 4.5 billion years ago,” he said.

The great thing about these kittens — besides the obvious — is that they reveal how utterly mysterious Saturn still is, even after Cassini. To be fair, if any planet were secretly serving as a kitty utopia, it would almost certainly be Saturn.

“Saturn’s rings look so serene from a distance, but then when you get up close there is SO MUCH dynamic activity taking place,” Summer Ash, an astrophysicist at Columbia University, told Inverse. “From spiral waves to vertical structure to spokes, and now moonlets! It’s bananas. These moonlets are yet another aspect of Saturn’s rings that shows how little we understand about the system, even after a 13-year mission at the planet.”

If you liked this article, check out this video of what it looks like to land on an alien moon.

More like this
Science
Jan. 14, 2023
15 years ago, a spacecraft swung by Mercury to beat the Sun's gravity
By Allie Hutchison
Science
Jan. 12, 2023
No, the Curiosity rover didn’t find gem opals — but it may have found something more important
By Doris Elín Urrutia
Science
Jan. 22, 2023
Astronomers find a surprise layer of volcanic rock in Mars’ massive canyon
By Kiona Smith
LEARN SOMETHING NEW EVERY DAY.
Related Tags
Share: