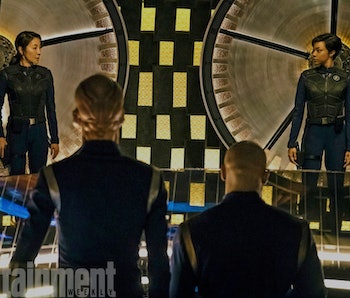 Among the space battles, interpersonal relationships, and the impending doom of the Klingon Empire in Star Trek: Discovery is a pretty damn good television show. The majority of critics agree: the first two episodes of CBS’s Discovery are a worthwhile watch.

Star Trek: Discovery, the first new Star Trek show in 12 years, premiered on Sunday night, with the first episode, “The Vulcan Hello,” airing on CBS and the second, “Battle at the Binary Stars,” premiering on CBS All-Access.

The runaway star of the series is, according to critics, Sonequa Martin-Green’s Commander Michael Burnham, a complicated, multi-cultured human raised by Vulcans and, specifically, the famed Spock’s father, Sarek. Burnham has a personal vendetta against the Klingon Empire, her anger and fear barely contained by the strict logic imposed upon her by the Vulcans as a child. This proves difficult when she and the rest of the crew aboard the United Federation of Planets’ U.S.S. Shenzhou encounter a Klingon vessel at the edge of Federation-run space.

Variety writes that “‘Discovery’ may be set in a time of war, but it is not uniformly grim; there are some welcome comedic touches that hit the mark without detracting from the drama’s generally earnest approach.”

The core mission of “Discovery” is to make viewers care about Burnham, and it succeeds in that regard. Martin-Green is charismatic and quietly forceful in the lead role, and her character is an outsider in many ways, which gives “Discovery’s” writers a lot of interesting psychological territory to explore. Her professional relationships in the present and her personal bonds from the past are mostly fraught and complicated, and “Discovery’s” handling of those aspects of her story may well determine whether it becomes must-see viewing or not.

Splitting the difference between commercial slickness and graphic-novel solemnity, this Trek offers PG-13 violence, audience-pandering exposition dumps, cliffhanger endings, Game of Thrones–style pomp, and a touch of Lost’s mystery-box plotting, but also poker-faced musings on quantum science, moral relativism, logic vs. instinct, race vs. culture, and the military’s tendency to corrupt science in service of war.

Entertainment Weekly rightly refers to this “prologue” as a “secret Star Trek movie… better looking than any of the Next Generation films, more clever than Star Trek Beyond.” Like many other reviewers EW lauds Martin-Green’s performance.

Martin-Green latches onto some essential Trek protagonist ideal. Call it dutiful toughness. Blasted full of radiation, she strolls out of sick bay covered in burns. Held captive in her own ship’s brig, she argues ethics with a computer so she can jump through space without a spacesuit. With equivalent material, Chris Pine played his Kirk with physical comedy and flop-sweating tension. Call me old-fashioned, but I prefer Burnham’s no-bull professionalism.

The Hollywood Reporter was also pro-Burnham, but questioned the usefulness of the first two episodes creating a sort of “pilot.”

CBS All Access is counting on the Star Trek franchise being sufficient inducement to drive viewers to the new platform, but as someone whose dedication to the Star Trek isn’t absolute, Discovery has to stand as Discovery, and this is a disorienting start. The first two episodes sell one show that doesn’t feel like a regular series… So that really puts everything on Martin-Green, at least for me, and even as great as she is, I’m not sure if she’s enough.

And unlike most other reviews, TV Guide stresses just how little someone needs to know about Star Trek to enjoy Discovery.

Regardless of what may — or may not — be a misstep, though, the first two episodes of Star Trek: Discovery are a satisfying introduction to a new chapter in the Star Trek franchise. They successfully capture viewers’ attention with impressive special effects… and they show real narrative promise as we head into a war between the Federation and the Klingons in the episodes that follow. The questions of morality raised within the premiere are pulled from a familiar well that’s infinitely deep, and with Burnham headed to prison for her actions, will likely continue to be raised and explored again and again.