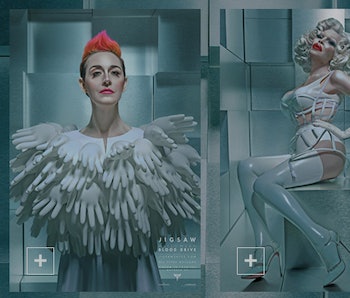 The posters for the Saw blood drive, a promotional staple for the horror franchise, feature more than the typical spooky-sexy nurses and a call to donate. This time, the advertising campaign entitled “All Types Welcome” promotes the eighth film in the series, Jigsaw, in addition to opposing the Food and Drug Administration’s restrictions on gay men and transgender donors.

“All Types Welcome” features a diverse range of nurses portrayed by social media powerhouses like transgender club icon Amanda Lepore and Shaun Ross, an openly gay model who has worked with luxury brands like Alexander McQueen and Givenchy.

As it currently stands, the FDA requires men who have sex with men to abstain from same-sex activity for a year before donating blood, and transgender individuals who want to donate are often misgendered at donation centers or marked as ineligible donors based on their self-reported gender identity.

Opponents of these restrictions argue that because the technology for screening blood for HIV and other transfusion-transmissible diseases exists renders such guidelines unnecessary. And studies have indicated that men who have sex with men and choose to become blood donors have a much lower prevalence of HIV infection than the general population, which “indicates that considerable self-selection likely took place in individuals who presented to donate,” according to the FDA itself.

Tim Palen, chief brand officer of Lionsgate, unveiled the promotional photos, which he also shot, on Sunday via his Instagram account.

Blood drives have been a part of the marketing for the Saw franchise since 2004, as have the provocative posters that accompany them. But this time, the campaign took on an actively political tilt in the hopes of altering the FDA’s rules. “We want this policy changed,” Mark Burg, who has produced the Saw franchise since the first movie, said in an interview with the New York Times.

Lepore, one of the models, echoed Burg’s sentiments: “It’s exclusion, and it’s ridiculous, and it’s discriminatory,” she said.

The blood drive begins October 5 and will span 25 cities, according to information available on the film’s promotional website. Donate… if you dare.