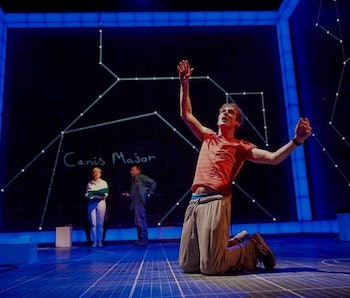 The Tony Awards are fun in the way that black-tie events that don’t particularly affect anything are fun. The ceremony is like a mashup of the White House Correspondent’s Dinner, your niece’s dance recital, and Cirque du Soleil. In other words, it’s pretty great and — here’s where it’s unlike the Oscars — interesting things happen sometimes. This year, one interesting thing in particular happened: The Curious Incident of the Dog in the Nightime won for best play. This is interesting because TCIOTDITN is a play about Asperger’s that is generally respectful about the condition. In other words, it is the opposite of Big Bang Theory, Silicon Valley, and Parenthood.

Obviously, this is disrespectful to both people with Asperger’s, whose condition manifests itself in a myriad of ways, and the real life people who care about people with Asperger’s. The best example of this is, of course, Big Bang Theory, on which Jim Parsons plays Sheldon Cooper, a physics researcher who is clearly on the spectrum and whose queasily asexual fussiness frequently drives the plot, allowing viewers to identify with Johnny Galecki’s more relatable Leonard Hofstadter or Penny, who is sexually attractive.

Silicon Valley has a subtler approach, portraying the spectrum as the place for venture capitalists.

But Asperger’s isn’t a quirky personality trait or a club you get to join after you make your first hundred million. It’s a real thing.

What’s radical about TCIOTDITN is the staging and the closeness of the perspective. Much of the play is performed as a series of monologues delivered by Christopher Boone, a 15-year-old who wants to know what happened to his neighbors dog and discovers what happened to his family. The epic journey at the heart of the narrative is a trip from Swindon to London, but the audience doesn’t see London. The audience sees a stage full of gleaming cubes, a sort of graph-paper version of reality that is unnervingly geometric but also compelling and beautiful in its own right. And Christoper isn’t completely out of the loop. He is as aware that he is different as he is that being different offers certain advantages.

Yes, he’s good at math, but that’s not who he is. That’s not the sum total of his personality. He doesn’t relate well to others but he definitely has relationships. He’s not just a comical left hemisphere. He’s a human. And he’s rendered with extraordinary care.

The Tony win is not a big moment for an Asperger’s rights movement or anything like that, but it’s something. It’s a step toward understanding and away from the chuckling stigma or more popular entertainment.