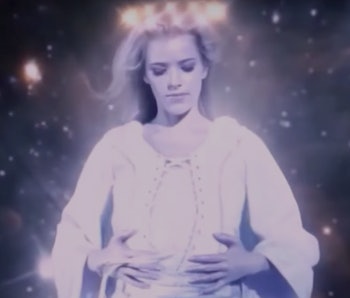 Time might not be as kind to David Meade, a self-styled Christian “researcher” who says that Saturday, September 23 will mark the beginning of the end of the world. And he’s not the only one. A video on the YouTube channel for the Evangelical Christian publication Unsealed details the astrological indications that correlate to a passage in the Book of Revelation. The video has been viewed more than 2.5 million times in the past month.

Here’s the short version: Those who believe that the rapture will begin Saturday say the relative locations of Jupiter, Mercury, Mars, and Venus, as well as the constellations Virgo and Leo, all match up with the beginning of Revelation 12. That passage reads, “And there appeared a great wonder in heaven; a woman clothed with the sun, and the moon under her feet, and upon her head a crown of twelve stars.”

In addition to Saturday’s unique astrology, it also marks 33 days since the total solar eclipse that crossed the continental United States in August. This number, according to Meade, holds great significance for Bible numerologists.

Needless to say, even though the Bible serves as a meaningful religious text that informs the lives of nearly one-third of all people on Earth, it’s not a scientific text. As such, mainstream Evangelical Christians don’t think people should listen to Meade.

“There’s no such thing as a Christian numerologist,” Ed Stetzer, a professor and executive director of Wheaton College’s Billy Graham Center for Evangelism, tells the Washington Post. “You basically got a made-up expert in a made-up field talking about a made-up event.… It sort of justifies that there’s a special secret number codes in the Bible that nobody believes.”

On Meade’s website, he explains his beliefs further, with writings and videos about a planet called Nibiru or Planet X that plays a significant role in the coming cataclysm. Inverse reported in August that people thought Nibiru would collide with the Earth on the day of the eclipse … back on August 21. In case you weren’t sure, that did not happen.

Meade’s site has the feel of many other conspiracy theory websites: logic that feels compelling to people who already bought into the theory but makes little sense to those who aren’t already convinced. There’s a good bit of content about how the deep state is sabotaging President Donald Trump, too.

“You know, President Donald Trump has an IQ of 156 and he has access to information that is light years ahead of the rest of us. Everybody needs to just relax and watch! He has the Republican-controlled Senate Intelligence Committee working on it. He has his own people working on it. He’s going to have, as the saying goes, the ‘last laugh.’ Sit back and enjoy the ride,” the page reads.

Do with that what you will. Long story short, feel free to make plans for Saturday.

If you liked this article, check out this video about the “Flat Earth” movement making a comeback.

More like this
Science
5.4.2022 11:00 AM
May 2022 Total Lunar Eclipse: You need to see the first Blood Moon of the year
By Brooke Edwards
Science
5.11.2022 8:15 PM
An ultra-bright nova hid an elusive new phenomena — but astronomers caught it in action
By Kiona Smith
Science
5.4.2022 8:00 PM
Astronomers find a puzzling parasitic object — is it a black widow pulsar or something else entirely?
By Charles Q. Choi
Related Tags
Share: