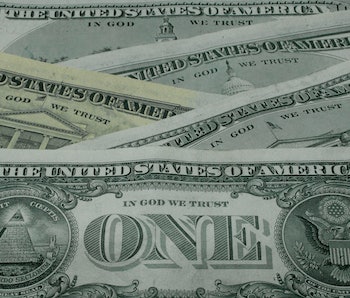 In her new aptly-named book about what happened during the 2016 election, Hillary Clinton drops a major bomb about the campaign that almost was: At one point, she seriously considered a platform that included basic income for Americans.

This idea came to hear through reading With Liberty and Dividends for All: How to Save Our Middle Class When Jobs Don’t Pay Enough, a 2014 book by environmentalist and entrepreneur Peter Barnes.

Barnes considered what about his work and the increasingly popular idea resonated with the former Secretary of State.

“I think this is something that will happen in millennials’ lifetimes,” he tells Inverse, adding he was both “dumbstruck and pleased” to find his book had made it onto her reading list and was so seriously considered. “It’s comparable to what earlier generations’ issues like social security and Medicare were.”

Barnes says he’s not entirely sure why basic income has gained such steam in recent years, though he says the recent championing of the idea by Silicon Valley entrepreneurs may be a factor. However, both he and Clinton see the value of basic income in different terms than, say Facebook founder Mark Zuckerberg and SpaceX head Elon Musk, who have advocated for basic income as a solution to the futuristic problem of widespread automation.

Barnes and Clinton focus more on how it might be necessary in the present to address problems like inequality and financial instability.

Here’s the relevant passages from What Happened, Clinton’s book, about basic income:

Before I ran for President, I read a book called With Liberty and Dividends for All: How to Save Our Middle Class When Jobs Don’t Pay Enough, by Peter Barnes, which explored the idea of creating a new fund that would use revenue from shared national resources to pay a dividend to every citizen, much like how the Alaska Permanent Fund distributes the state’s oil royalties every year. Shared national resources include oil and gas extracted from public lands and the public airwaves used by broadcasters and mobile phone companies, but that gets you only so far. If you view the nation’s financial system as a shared resource, then you can start raising real money from things like a financial transactions tax. Same with the air we breathe and carbon pricing.

Once you capitalize the fund, you can provide every American with a modest basic income every year. Besides cash in people’s pockets, it would also be a way of making every American feel more connected to our country and to one another—part of something bigger than ourselves. I was fascinated by this idea, as was my husband, and we spent weeks working with our policy team to see if it could be viable enough to include in my campaign. We would call it “Alaska for America.” Unfortunately, we couldn’t make the numbers work. To provide a meaningful dividend each year to every citizen, you’d have to raise enormous sums of money, and that would either mean a lot of new taxes or cannibalizing other important programs. We decided it was exciting but not realistic, and left it on the shelf. That was the responsible decision. I wonder now whether we should have thrown caution to the wind and embraced “Alaska for America” as a long-term goal and figured out the details later.

“Personally, I got into this whole way of thinking long before this automation prospect became a thing,” Barnes tells Inverse. “I don’t think [that argument] is what will sell the idea to the broader public. I think this idea is valid without that. This is a situation today that merits this kind of response now.”

Barnes focused a portion of his book on the Alaska Permanent Fund, a dividend payout system that draws from the state’s natural resources.

The two also see eye to eye in envisioning how a basic income might be able to bring Americans together. As Clinton put it, this kind of system might make Americans feel “part of something bigger than ourselves.”

“Nothing else in our life really holds us together in a concrete way as economic co-equal citizens,” Barnes says.

Ultimately, Clinton’s team determined that the “responsible decision” would be to leave the idea on the shelf. However, she writes, “I wonder now whether we should have thrown caution to the wind and embraced ‘Alaska for America’ as a long-term goal and figured out the details later.”

In Barnes’ view, this is something she should have done and perhaps an approach future candidates will take; maybe even as early as 2020.`

“When I started writing [the book] no one was talking about basic income,” he says. “Just in the three years since then there’s been an explosion of interest in this topic. It’s astonishing to me.”