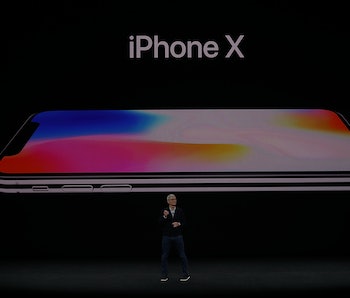 Apple unveiled both the iPhone 8 and iPhone X Tuesday, but one phone was conspicuous by its absence. The iPhone X is pronounced “iPhone ten,” suggesting the smartphone line will skip over the ninth iteration entirely.

If this does mean we won’t ever see the iPhone 9, the move is par for the course for Apple, and it’s not the only company to snub numbers it doesn’t like.

There’s a couple of ways to read the decision. It could be a reference to the fact that it’s 10 years after the first iPhone launched. When Steve Jobs took to the stage in 2007, he promised a three-in-one device that could act as an iPod, a phone, and an internet communicator. It seems rather quaint now.

The other approach, which is possibly more likely, is Apple has a habit of using the “X” numeral for a product it sees as reinventing the entire product line.

Steve Jobs unveiled the successor to Mac OS 9 in 2000. “Mac OS X,” the tenth version of the Mac’s operating system, was essentially an entirely new product. It was built off of the NeXTSTEP operating system that powered the computers sold by Jobs’ other venture, NeXT, which he had founded after being ousted by Apple in 1985. When Apple bought NeXT in 1997, it used the acquisition to aid the development of a more modern product.

Although Apple officially prefers to pronounce the numeral in the Mac OS X and now iPhone X as “ten,” tech writer John Siracusa has noted before that even Jobs used to say “X” sometimes by accident.

However it’s pronounced, the company seemed to love the “X” thing so much it struggled to move past it: OS X El Capitan,” released in 2015, still used the “X” branding 15 years later.

Apple also did the whole “X” thing with Mac OS X Snow Leopard (version 10.6) in 2009. The company also said at the time that the next version of the QuickTime video player, an ambitious redesign from the ground-up, would be “X.”

“Seems like only yesterday that QuickTime was at version 7,” Engadget wrote in 2009. “Oh wait, that was yesterday.”

The company went for the hat trick by releasing the Final Cut Pro X professional video editor in 2011. A ground-up rewrite of the software, it shared very little in common with its predecessor Final Cut Pro 7. Reviews were scathing: One professional described it to the New York Times as “Apple’s worst release in history.” Not every “X”-style jump is good, apparently.

But Apple isn’t the only company to pull off similar jumps. Microsoft Office 2010 was technically version 14.0, even though the 2007 suite was version 12.0. The company’s Channel 9 developer blog explained that 13 is considered unlucky. Yes, Microsoft skipped a version because of superstition.

Microsoft also joins Apple in jumping over version nine without worrying too much. Windows 10 launched in 2015 after Windows 8. The closest Microsoft ever got to giving an explanation was when Windows head Joe Belfiore was photographed at the Build developer conference that year with a t-shirt on. Written in binary, one section said: “Windows 10, because 7 8 9.”

While it feels unlikely the iPhone 7 devoured its would-be successor, that may explain why there’s no iPhone 9.