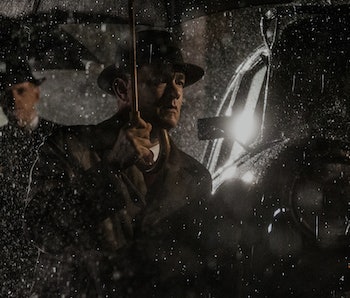 Whether or not it’s a coincidence that Steven Spielberg’s Cold War thriller Bridge of Spies will arrive amid heightened US-Russian tensions — it’s probably not a coincidence — the film will inevitably become a jumping off point for endless thinkpieces about the relationship of the KGB (and by extension Vladimir Putin) to America’s security and military apparatus. We’d never behoove a Foreign Policy writer a hot take, but Bridge of Spies looks to be, in terms of international relations, the least provocative Cold War movie conceivable. The story of the downed U-2 spy plane and the negotiation to return its pilot to the U.S. over the Glienicke Bridge is, fictionalized it or not, about compromise.

And the Russians involved weren’t that evil.

Not to soft-pedal the extremity of the mid-fifties KGB, an organization you wouldn’t have wanted to run into in an East German alley, but [Francis Gary Powers](http://en.wikipedia.org/wiki/Francis_Gary_Powers survived, exchanged for "Rudolf Abel", who was known as KGB Colonel Vilyam Fisher to his closer associates. The situation was diffused by diplomatic means and the higher ups, which is to say Kruschev and Eisenhower, were largely responsible for making that happen. Close as they got to nuclear fisticuffs, the U-2 affair never got as ugly as it could have and Powers went to fly again (for better or worse, he crashed and died in 1977).

If the trailer shows anything, it shows Spielberg and Tom Hanks presenting an idealized version of an American democrat. But what it doesn’t show is just as significant: a malevolent Russia. The world doesn’t need that movie and Spielberg is too smart to make it.

More like this
Culture
8.5.2022 11:30 AM
You need to watch the best James Bond movie of the century on Netflix ASAP
By Alex Welch
Entertainment
8.2.2022 12:30 PM
How Scott Snyder is blazing a new path in comics after 'Batman'
By Eric Francisco
Culture
8.10.2022 11:30 AM
10 years ago, Jeremy Renner ruined the best spy-thriller franchise of the century
By Adrian Manuel
Share: