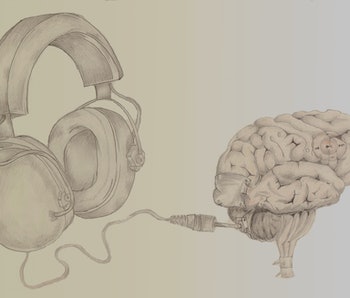 Using a device that interprets electrical impulses from the brain, researchers have developed an interface that enables users to write melodies using only their thoughts.

In a study published on September 6 in the journal PLOS One, researchers at Graz University of Technology and University of Graz in Austria explained how they exploited a well-known electrical brain signal, the “P300 event-related potential,” to make the device work.

Their results are promising for the future of this field: Amateur and professional musicians not only achieved high levels of accuracy with the program, but they also had a positive experience using it. This is a big deal — if the point of BCI systems is to assist physically disabled people, they have to be pleasant and easy to use.

What makes the device so intuitive is its use of the P300 event-related potential, which is well studied. This signal, which is associated with focusing attention, can be detected by a type of non-invasive headgear fitted with electrodes called an electroencephalogram (EEG) cap. It sends these relatively noisy signals to an amplifier, which allows a computer to more easily read the user’s brain waves. The brain waves then translate into commands to the computer.

From here, the challenge is simply to train a user to create the proper brain waves that correspond to software controls. Here’s what it looks like:

These scores are quite good and above the 70 percent threshold that researchers consider to be successful. The only issue is how long it takes users to control the software. In the word-copying task, the nonprofessionals took an average of 77 seconds to copy one five-letter word. This is very slow.

But the fact that the users composed actual melodies (bits of which you can hear in the video above), plus their high levels of satisfaction with the experience, prove that this concept can work.

“This was the first step towards establishing a Brain Composing system as a tool for entertainment and, even more important, self-expression for severely disabled people,” write the study’s authors.

If you liked this article, check out this video about headphones that can monitor your brainwaves.

More like this
Gaming
5.11.2022 1:00 PM
Game devs aren't getting proper credit for their work — here's how to fix it
By Hayes Madsen
Gaming
5 hours ago
Everthing we know so far about future Nintendo Switch Sports updates
By Jess Reyes
Gaming
3 hours ago
15 years ago, an FPS flop saved a dying cyberpunk universe
By Mo Mozuch
Related Tags
Share: