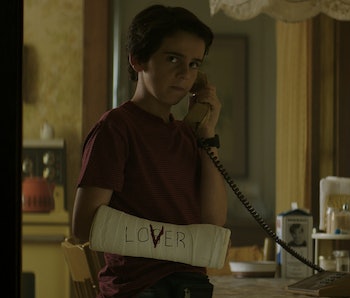 In It, Pennywise the Dancing Clown is so effective at being terrifying because he actually becomes his victims’ greatest fear. This fear is rooted in phenomena that occur in the real world, proving that sometimes the horrors of life can be worse than a demon clown.

When Eddie Kaspbrak, a member of the “Losers’ Club,” played energetically by Jack Dylan Grazer, first encounters Pennywise, he sees the creature as a leper. Malformed and oozing, the leper represents Eddie’s greatest fear: infectious disease. His phobia seems to stem from a mental illness his mother suffers from known as Munchausen syndrome by proxy, which manifests in her relentless “worrying” about his health.

In this mental illness — and form of child abuse — the caretaker either causes the child to develop real symptoms or convinces the child that they are ill when they are actually healthy. Eddie, obsessed with taking his prescription medications and keeping his hands clean, is the victim of his mother’s Munchausen syndrome by proxy, who has kept her son on a strict regimen of pills for his entire life.

The first case of Munchausen by proxy documented in medical literature was in 1977, in which doctors repeatedly found blood in a six-year-old girl’s urine samples. Later, it was revealed that her mother had actually put the blood in the samples. In It, Eddie’s mother convinces him that he has multiple illnesses, including severe asthma, which has to be treated with pills and an inhaler. In a pivotal moment in Eddie’s development, he discovers that the pills he’s been swallowing all along are actually placebo pills.

Eddie is a little older than the average sufferer of Munchausen by proxy — most kids affected are six years old or younger — but the fact that his mother is the perpetrator is common. According to the Cleveland Clinic, most caretakers with the syndrome use their “caretaking” as a means to gain praise from people for their parenting. The caretaker’s subconscious goal is sympathy and special attention, which in turn is thought to be the caretaker’s way of dealing with “severe emotional difficulties.”

Rare or not, the syndrome is still terrifying — making it fitting as a plot point for Stephen King’s newest iteration of It.