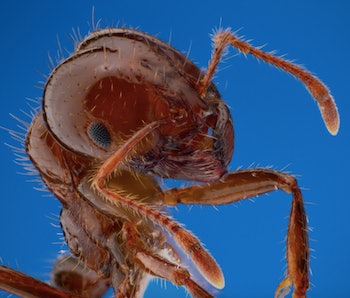 If the floating masses of fire ants transported by the floodwaters of Hurricane Harvey made you shudder all over, new research on the pesky insect might help to calm your nerves. Scientists have discovered that compounds in the makeup of fire ant venom may be used to treat psoriasis.

Scientists from Emory and Case Western collaborated on a study of the main toxic components of fire ant venom. Their findings show that elements in venom can be used to reduce skin thickening and inflammation in mice with psoriasis, leading researchers to believe that a similar treatment could work for humans. The results were published Monday in the journal Scientific Reports.

Psoriasis is a common, chronic, immune system-based disease that manifests in patches of abnormal skin that can be scaly, red, and sometimes itchy or sore. Treatments for the condition depend on its severity and can range from topical creams to drug medications.

Solenopsins, the toxic component in fire ant venom, chemically resembles lipid-like molecules called ceramides. Ceramides can aid in maintaining the barrier function of the skin and are often found in skin care products. But ceramides are fickle, and under certain conditions they can also be converted into something called sphingosine-1-phosphate (S1P), transforming into a molecule that causes inflammation — a sensation that can go down if you ever experience a fire ant sting.

Knowing this, scientists created a version of fire ant venom’s solenopsins that couldn’t be converted into S1P and tried them on the mice. The mice displayed decreases in skin thickness, and when the scientist-engineered solenopsins were applied to immune cells in culture, the solenopsins decreased cell production of the inflammatory signal IL-22 and increased production of anti-inflammatory IL-12.

“We believe that solenopsin analogs are contributing to full restoration of the barrier function in the skin,” says lead author Jack Arbiser, M.D., Ph.D., professor of dermatology at Emory University School of Medicine.

While topical creams can be used to soothe skin, it appears that a treatment using fire ant venom may be able to improve and restore skin health.

Apparently, the venom’s solenopsins could have even more positive uses. According to Arbiser, his lab previously found that solenopsin works as an inhibitor of blood vessel growth and has potential as an anti-cancer agent.

Must Read: Science Explains What Kind of Blood Mosquitos Like Best

If you liked this article, check out this video about robot ants.

More like this
Science
8.3.2022 3:44 PM
Ground-breaking technology restores dead organs back to a life-like state
By Miriam Fauzia
Science
7.24.2022 1:00 PM
Why is my cat wagging its tail? Vets reveal the surprising answer
By Tara Yarlagadda
Science
7.29.2022 10:00 AM
Which animals get Covid-19? A new database tracks cases around the world
By Jennifer Walter
Related Tags
Share: