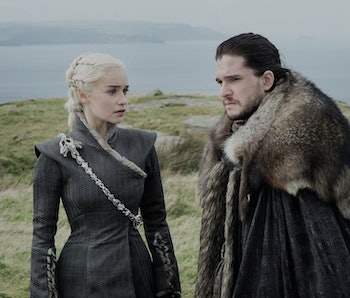 If you watched this season’s Game of Thrones finale, there’s an 80 percent chance you watched it illegally. That’s not meant as an accusation — that’s just the math.

A report released this week by the anti-piracy organization Muso found that episodes from season seven were streamed, downloaded, or otherwise purloined more than a billion times, dwarfing how many watch the show legally.

According to Muso’s estimates, 120 million people pirated the Game of Thrones finale within the first three days of its broadcast, compared with the 30 million or so who make up HBO’s official viewership figures. That’s an especially high figure when you consider the finale isn’t one of the episodes that leaked ahead of its airdate.

The leak drove up the numbers for episodes five and six, which about 150 and 180 million people have watched respectively. And it doesn’t appear interest in the show is waning — Muso estimates 90 million people pirated the season premiere immediately after it aired, but nearly another 100 million have since watched that episode.

There’s some fuzziness in these numbers, of course, as they only say how often an episode was pirated, not how many people gathered around to watch or whether some were streamed multiple times by the same individuals. But either way, the numbers are staggeringly high, and probably more than a little irritating to HBO.

The channel has seen some bright spots for its legal streaming services off Game of Thrones, but revenue is still down millions for HBO Now from where it was last year. A billion illegal downloads and streams is a ton of potential money to miss out on, though it’s entirely possible many of those who pirated the episode couldn’t otherwise justify the cost, or live in places where it’s still not possible to watch HBO legally.

More like this
Entertainment
7.31.2022 12:00 PM
'House of the Dragon' will obliterate one annoying 'Game of Thrones' rule
By Alex Welch
Gaming
8.11.2022 1:30 PM
Overwatch 2 is ditching the game industry's worst feature
By Willa Rowe
Innovation
8.10.2022 9:00 AM
Scientists may have revealed the ancient secret behind China’s Bronze Age
By Sarah Wells
Related Tags
Share: