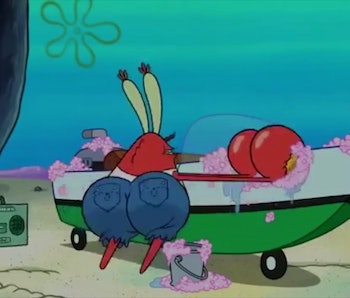 The summer of 2017 was, in summation, a lot to handle. Between the ongoing political shit-storm, a slew of natural disasters, and the birth of Beyoncé’s twins, there was barely enough time to take a breather and look at memes.

Just kidding! There is always enough time for memes, and the ones that cropped up this summer were some of the strangest yet.

These memes are difficult to rank if only because they are difficult to properly articulate. Is that famous stock photo called “jealous girlfriend” or “distracted boyfriend?” But as the complexity of memes increases, so does the fun of being in on the joke. With that in mind, here are the best, weirdest, most inarticulable memes of the summer.

First of all, late May, when “one thicc bih” first reared its head, is summer. End of discussion.

This meme originated with the above video, created via an app called Ditty.it that proclaims a tough truth about Spongebob Squarepants character Mr. Krabs: that crustacean is thicker than a Snicker. But did it have to be proclaimed? Aren’t some things better left unsaid? Unfortunately, not online. Soon other figures, from the Hilary Duff to Sonic the Hedgehog, received the same musical treatment.

This meme was relatively short-lived, which is good because it is extremely haunting. This reporter is grateful that its reign of terror is over.

Because late May is summer, guess what? So is early September, which is when Michael Dapaah appeared on BBC 1Xtra’s “Fire in the Booth” segment as Roadman Shaq. Roadman Shaq is a British MC with unparalleled scatting skills, and a clip of him spitting quickly went viral, as fans adapted the video itself and valiantly attempted to transcribe its contents in the name of… content.

The original video is a hypnotizing, odd expression of exuberance, and this meme is still in its nascent stage, so be on the watch for updates if you love it when man’s not hot.

Howdy, I’m the sheriff of explaining this meme to you. I’m going to explain this meme to you. Comedian and internet guy Brandon Wardell sparked this trend with the above tweet in the beginning of June, and Twitter quickly erupted with copycats.

Publications even ran explainers on how to format your own emoji sheriff, and a still-active Twitter bot tweets sheriffs made of different emojis on a daily basis. This meme was occasionally even utilized for political messaging by the likes of American hero and social media maven Chelsea Manning.

This meme is not really a thing anymore, but if you have a really good idea now that the buzz had died down, you could probably still rack up some likes.

This meme is a relatively straightforward deconstruction of reality. It involves the reframing of literally any action as something that could be mistakenly construed as homosexual by men who see that as a negative thing. Through the lens of this meme, the fundamental elements of life become fraught with gay panic.

“Fellas, is it gay…?” calls upon people to question the nature of their existence. The logical hoops that Twitter users jump through to make these connections are astonishing, creative, and perhaps faintly offensive.

We live in an era of uncertainty about how to proceed into the future and where to compartmentalize our past. It’s only natural to ask questions. In fact, asking questions could be the only natural response to the chaotic nature of existence. This meme is still around, if you know where to look.

More like this
Gaming
8.2.2022 5:27 PM
"Woke" GTA 6 is the best thing that could happen to the franchise
By Willa Rowe
Entertainment
8.11.2022 1:00 PM
Our Flag Means Death fans are redefining historical fiction
By Dais Johnston
Culture
8.13.2022 6:30 PM
These cheap home upgrades are skyrocketing in popularity because they look so freaking good
By Dena Ogden
Related Tags
Share: