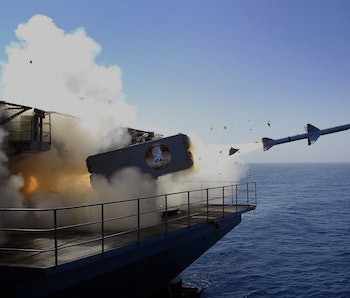 Elon Musk is worried about the future. In a series of tweets on Monday, the tech entrepreneur claimed that artificial intelligence could spark a new world war as states seek to bolster their own capabilities. Musk made the comments in response to a story about Russian president Vladimir Putin, who said that the nation that leads the way in A.I. will dominate the world.

“An automated WWIII at that,” said Twitter user JakeBlueatSM. “That’s a worry…”

“May be initiated not by the country leaders, but one of the AI’s, if it decides that a prepemptive strike is most probable path to victory,” Musk responded.

Musk’s comments came in response to a lecture held by Putin, where he spoke to over one million students across Russia via satellite link on Friday. During the 45-minute open lesson, held to mark the start of the school year, he claimed that if Russia dominated in the realm of A.I., it would share its knowledge with the rest of the world.

“Artificial intelligence is the future, not only for Russia, but for all humankind,” Putin said, RT reports. “It comes with colossal opportunities, but also threats that are difficult to predict. Whoever becomes the leader in this sphere will become the ruler of the world.”

Claiming that A.I. is the most likely cause of a major war may seem strange after recent developments in North Korea, but Musk doesn’t see the country posing as strong a threat. On Sunday, state media announced the country had successfully detonated a hydrogen bomb. The device is intended for placement on an intercontinental ballistic missile. Nonetheless, Musk ranks A.I. as a bigger threat as political realities mean North Korea could not launch a nuclear missile.

“NK launching a nuclear missile would be suicide for their leadership, as SK, US and China wd invade and end the regime immediately,” Musk said.

China, a country that Musk noted as having a strong interest in computer science, has big plans to lead the way in artificial intelligence. Spurred by the development of AlphaGo, a system created by DeepMind that beat Lee Sedol at the board game Go, the country wants to lead the world in A.I. development by 2030.

“It’s a very realistic ambition,” Anthony Mullen, a director of research at analyst firm Gartner, told The Verge. “Right now, A.I. is a two-horse race between China and the U.S.”

But whether that two-horse (or possibly three-horse) race leads to a global conflict is unclear. Even less certain is whether a war could spark by an A.I. deciding that a preemptive strike was the best cause of action. Musk has received criticism in the past for his doomsday predictions about A.I.. In July, he claimed that the technology is “a fundamental risk to the existence of human civilization.”

“While there needs to be an open discussion about the societal impacts of A.I. technology, much of Mr. Musk’s oft-repeated concerns seem to focus on the rather far-fetched, super-intelligence take-over scenarios,” Subbarao Kambhampati, a professor of computer science at Arizona State University, told Inverse.